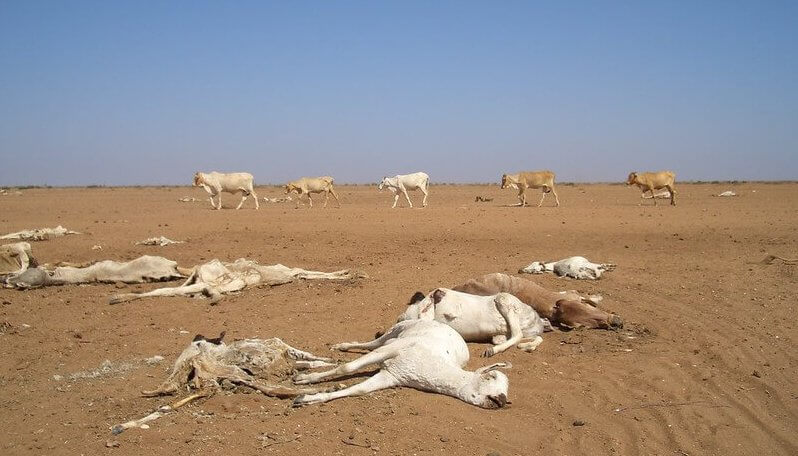 The arrival of the rains leaves the drylands hit harder than richer areas. Once again, climate change sows injustice.

LONDON, 7 December, 2020 − Not even the climate can be even-handed. When the rains come they leave the world’s drylands hit harder: the wealthier fare better and the poorest get relatively a little poorer. And the evidence is visible literally at the grassroots.

European scientists have been measuring vegetation growth as recorded in fine detail by satellite observation over the last 20 years. And they report that in the developing world, the vegetation that sprouts after rainfall on arid lands is more meagre, while in the better-off nations the same rainfall on the same kind of dryland terrain produces more healthy growth.

The consequence, researchers warn in the journal Nature Sustainability, could result in more food shortages, more disruption, and growing numbers of climate refugees.

“We observe a clear trend of arid areas developing in a negative direction in the most economically challenged countries,” said Rasmus Fensholt, of the University of Copenhagen, one of the authors.

“Here it is apparent that the growth of vegetation has become increasingly decoupled from the water resources available, and that there is simply less vegetation in relation to the amount of rainfall. The opposite is the case in the wealthiest countries.”

“One consequence of declining vegetation in the world’s poorer arid regions may be an increase in climate refugees from various African countries. There is no indication that the problem will diminish”

Roughly 40% of the Earth’s habitable land is arid or semi-arid, and the global drylands are home to almost a third of all humanity, around half of all the planet’s birds and mammals, as well as providing range for livestock and land for crops. Most of the world’s drylands are also home to many of the world’s least developed countries, and many of the poorest citizenry.

And, in a world of climate change driven by ever-rising global temperatures, fuelled in turn by greenhouse gas emissions from increasing fossil fuel use, things don’t look promising.

Research from the last four decades has repeatedly predicted that although global rainfall may be higher in total, those regions already well-watered will tend to become wetter, while those that have adapted to arid climate regimes will get drier. By the end of this century the proportion defined as dryland may have expanded by 23%.

And although higher temperatures, higher levels of atmospheric carbon and changes in rainfall regimes have had the overall effect of “greening” many of the drylands, those already struggling to survive are getting less benefit from any rain that falls.

The scientists, from Denmark, Norway, Sweden and the Netherlands, made a close analysis of satellite imagery from 2000 to 2015 to identify not rainfall changes, but vegetation productivity in relation to rainfall: they found pronounced differences across regions and continents. Drylands in Africa and Asia fared proportionately less well compared to South America and Australia.

What made the difference, they think, is the number and the plight of the people on whom the rain fell. Rapid population growth in Africa meant greater pressure on land less suitable for agriculture, and more intense grazing on already fragile grassland cover.

In the richer nations, conversely, farms had expanded and intensified with help from fertiliser and irrigation.

This is not the first study to find that in a world of climate change, the poorest − among them those who have contributed least to global heating − will be hit hardest. The match of more people with less productive land can only mean more competition for less food at higher prices.

“One consequence of declining vegetation in the world’s poorer arid regions may be an increase in climate refugees from various African countries. According to what we have seen in this study, there is no indication that the problem will diminish in future,” Professor Fensholt said.

“We have been pleased to see that, for a number of years, vegetation has been on an upwards trend in arid regions. But if we dig only a tiny bit deeper and look at how successfully precipitation has translated into vegetation, then climate change seems to be hitting unevenly, which is troubling.” − Climate News Network