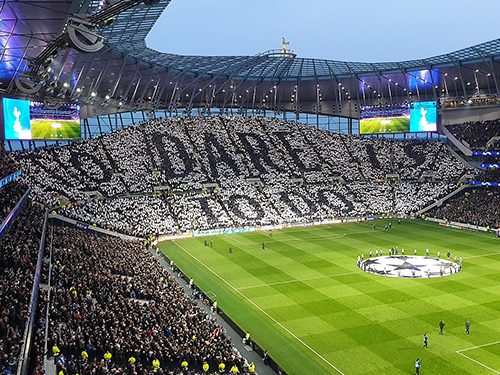 A popular football team in the United Kingdom is under pressure to part company with the AIA insurance company as its jersey sponsor, after campaigners revealed the Hong Kong-based insurer has invested at least US$3 billion in various coal projects.

“Tottenham Hotspur may be top of the Premier League for a change,” and “the logo of AIA has been emblazoned across the chests of Harry Kane, Hugo Lloris, and teammates since 2013,” The Guardian reports. But now, that sponsorship “risks becoming a source of shame for the club,” placing its climate credentials toward the bottom of the list for the country’s football teams—even though both the club and the company have expressed interest in doing better.

“The AIA Kick Out Coal campaign, which comprises several divestment groups, says this ‘dirty secret’ stains the shirt of Tottenham, which has otherwise gone further than almost any other club in its commitment to climate action,” The Guardian writes. “They say the coal investment also tarnishes the reputation of England football captain David Beckham, who is the global brand ambassador of AIA.”

Tottenham isn’t the only club with what the news story calls “dire” climate records, with Chevrolet sponsoring Manchester United, UAE airline Etihad backing Manchester City, Fly Emirates associated with Arsenal, and Russian colossal fossil Gazprom in a partnership with the Champions League. But “campaigners are focusing on AIA and Tottenham because that is where they see the greatest potential for change,” The Guardian explains. “Both organizations publicly aspire to the highest standards of efficiency and sustainability. This, says the campaigners, does not align with a link to coal—the dirtiest of fossil fuels and the main source of the carbon dioxide that is disrupting the climate.”

Last week’s story in The Guardian landed just a month after Tottenham signed on as a founding member of Count Us In, a global effort to mobilize a billion people to take action on climate change. One of those actions is to “choose financial institutions and funds that invest responsibly”.

AIA is a member of the Climate Action 100+ investor group, a five-year initiative hosted by Boston-based Ceres, and previously dropped its investments in tobacco and ammunition. But it’s “the only insurer in the group that has not fully divested from coal or adopted restrictions on new coal investments,” The Guardian says, citing campaigners.

“We congratulate Spurs for being top of the league. They deserve a sponsor who is top of their own league and should call on AIA to drop all their toxic coal assets,” said Insure Our Future campaign coordinator Peter Bossard.

“Along with Champions League sponsor Gazprom, next World Cup host Qatar, and several other Premier League shirt sponsors, AIA are an example for climate villains using football to launder their image,” he added. “Tottenham Hotspur is a climate champion among football clubs and could set an example by calling on their sponsor to clean up their coal business.”