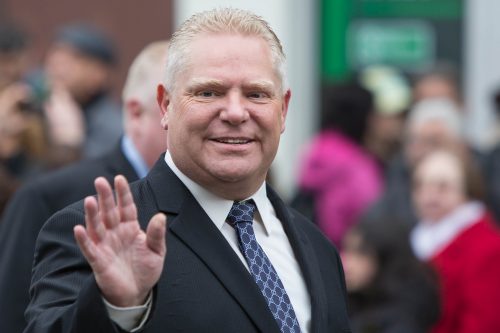 The Doug Ford government in Ontario has made little or no progress on key elements of its 2030 climate action plan, putting the province’s greenhouse gas emissions on track to increase rather than falling, Environmental Defence warns in a new report this week.

After two years in office, “the Ontario government has largely ignored its own Made-In-Ontario Environment Plan and failed to take meaningful action to reduce greenhouse gas emissions,” the Toronto-based organization said in a release yesterday. “What little progress has been made is in areas with the least potential for reducing emissions, while actions with the potential to deliver significant emissions reductions have been overlooked.”

The latest available data for 2018, the year Ford took power, show the province’s emissions increasing, from 155 to 165 megatonnes, after six straight years of declines.

“Ontario’s greenhouse gas emissions are rising when they should be falling,” said ED’s Ontario Climate Program Manager, Sarah Buchanan. “The province needs to stop using the Environment Plan as a prop and start acting on its promises to cut the growing emissions from buildings and transportation. Otherwise, there is no hope for Ontario to reach its target to reduce emissions 30% by 2030.”

In a separate report last month, Efficiency Canada warned that Canada’s carbon reduction targets could be in jeopardy if Ontario doesn’t improve its performance on energy efficiency. “The reduction in program budgets and savings in Ontario and Alberta have a significant national impact,” warned lead author James Gaede. “If these trends continue, national efficiency and emission reduction goals could be out of reach.”

• The province has made no progress on natural gas conservation, electric vehicle adoption, technology advances like energy storage and switching off high-carbon fuels, or implementation of a C$400-million Emissions Reduction Fund, all lapses that will lead to higher emissions.

• There has been some progress on clean fuels, but Lysyk estimated the resulting GHG cuts at only one megatonne, compared to the government’s claim of 3.5 Mt.

• The government has taken steps on minor GHG reductions related to transit and waste, but they only add up to 1.1 megatonnes of emission reductions (or 0.8 by Lysyk’s estimate), a fraction of the 10-Mt increase in 2018.

“Ontario’s Environment Ministry likes to tout a few accomplishments from its Environment Plan to show they’re taking action,” Buchanan writes in a blog post. “To be fair, Ontario has nipped around the edges with programs like its Emissions Performance Standards pricing system for industrial polluters, and a plan to slowly increase renewable content (mostly ethanol) in gasoline from 10 to 15% over the next decade. But by the time these programs were finalized, they’d been delayed, weakened, or debunked as credible ways to reduce emissions.”

More broadly, the province “is ignoring the most effective climate change solutions from its plan, like natural gas conservation and energy efficiency,” she adds. “Ontario is also MIA on its biggest source of carbon emissions: transportation. There are no plans to support a transition from gas-powered cars and trucks to electric vehicles, despite a claim in the plan that 16% of Ontario’s emission reductions will come from switching to low-carbon vehicles.”