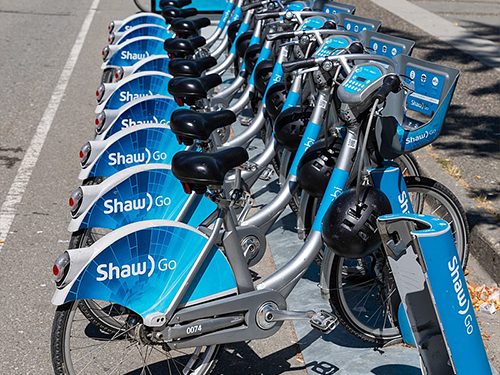 In a bid to reduce both emissions and costs—especially as online shopping explodes—major parcel couriers in Toronto and Montreal are experimenting with delivery by e-bike and trike. Collateral benefits include cleaner air, safer pedestrians and cyclists, and delivery workers delighted to be out from behind the wheel.

Delivery giant Federal Express “started delivering packages in downtown Toronto using e-bikes over the summer and is now looking to expand the program to other cities in Canada,” reports CBC News. Meanwhile, “Purolator and two smaller courier companies are part of a similar pilot called Project Colibri that launched in Montreal last year,”

The switch—first pioneered by small firms like Vancouver-based Shift Delivery—has seen Purolator expand its fleet “from one e-bike to six or seven,” while the companies within Project Colibri are making “up to 5,000 e-bike deliveries a week—nearly as many as it made over the last four months of 2019.”

A big driver for the companies is the need to reduce emissions, writes CBC. “Transportation is already the second-largest source of greenhouse gas emissions in Canada, after oil and gas, accounting for 25%.” And that portion will only grow with the aggressive, and possibly permanent, onset of online shopping, should the status quo on delivery methods be sustained.

The shift to e-bikes is particularly savvy from a delivery company’s standpoint because, nimble and small as they are, the bikes help cut the costs that accrue during “last-mile” delivery—that is, from sorting centre to customer. CBC writes that this leg is “a logistically challenging step that can represent 30 to 60% of the cost of delivery.”

A year into its pilot phase, Project Colibri has shown that e-bikes are 30 to 40% more efficient than trucks based on deliveries per hour, said Mickael Brard, project manager at Jalon Montreal, the city-funded non-profit behind Project Colibri.

“It’s one of the rarer sectors where we can [be] both more efficient and more sustainable,” he said.

The public stands to gain, as well, with the reduction in delivery trucks meaning less traffic congestion, cleaner air, and safer streets for cyclists and pedestrians, notes CBC.

And then there is the simple fun of riding an e-bike. “It was a really, really great experience,” said Toronto FedEx courier Yuri Mitroff. “It did not feel like work to me, which was the biggest thing. And I got a lot of exercise and a lot of vitamin D, a lot of sunlight.”

Both projects, however, are facing the pandemic-induced challenge of a worldwide bike shortage. And even aside from the added demand of this year, most e-cargo bikes are made in Europe, so they’re more expensive to import and maintain in North America.

To overcome the hurdles, Vancouver-based cycle logistics consultant Sam Starr recommended rebates to businesses that purchase e-bikes, regulations to make their use easier, and infrastructure such as curbside loading zones. Describing projects like Montreal’s Colibri as “critical” infrastructure, Starr said success will depend on collaboration between the public and the private sector.

“It can’t just be done by the private industry,” he told CBC.