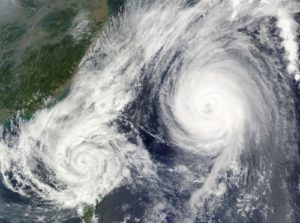 With the World Meteorological Organization (WMO) warning that the Earth has warmed 1.2°C since the mid-1800s, and a high-stakes virtual climate summit coming up December 12, United Nations Secretary General António Guterres is urging humanity to call off its “war on nature” and get greenhouse gas emissions under control.

While “I firmly believe that 2021 can be a new kind of leap year—the year of a quantum leap towards carbon neutrality,” Guterres told an audience at Columbia University Wednesday, “the state of the planet is broken,” with “apocalyptic fires and floods, cyclones, and hurricanes” becoming the new normal. Although recent carbon reduction pledges from several high-emission countries have put a 1.5°C pathway within striking distance, the WMO release and this week’s Production Gap Report “spell out how close we are to climate catastrophe,” he said.

“There is at least a one-in-five chance of [average global warming] temporarily exceeding 1.5°C by 2024,” said WMO Secretary-General Petteri Taalas.

Which means that, “when countries spend trillions of dollars to recover from the pandemic-triggered economic slowdown, Mr. Guterres said they must to do so in a way that emphasizes clean energy,” The Associated Press reports. “Countries should stop funding and subsidizing fossil fuels, he said. And countries need to fulfill their Paris promise to spend US$100 billion annually to help poorer countries develop cleaner energy.”

The WMO report said 2020 will end as one of the three hottest years on record, with ocean temperatures at record levels. With the climate crisis worsening across seven key indicators, it concluded that climate impacts are adding to the suffering already wrought this year by a global health emergency.

“In 2020, over 50 million people have been doubly hit: by climate-related disasters (floods, droughts, and storms) and the COVID-19 pandemic,” the report stated. “Countries in Central America are suffering from the triple impact of hurricanes Eta and Iota, COVID-19, and pre-existing humanitarian crises.”

AP says the report lists dozens of weather extremes over the last year, including a record 30 named Atlantic storms and hurricanes, a 54.4°C temperature record in Death Valley, California, record wildfires in California, Colorado, and Australia, record wildfires in the Arctic “culminating in a 38ºC mark in Siberia in June”, record low Arctic sea ice, and more than 2,000 dead in record rains and flooding in South Asia.