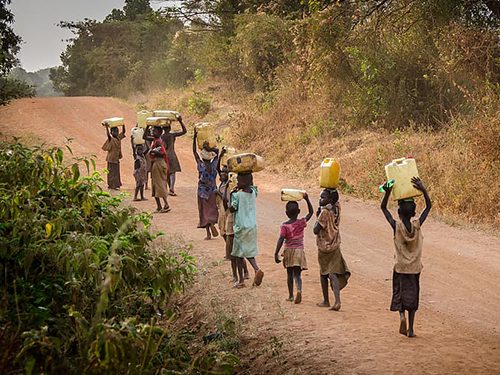 With the world’s per capita supply of freshwater down by one-fifth over the last decade, more than three billion people now face water shortages, with about 1.5 billion at risk of severe shortages or drought, the UN Food and Agriculture Organization (FAO) warned in a report late last week.

“A combination of climate breakdown, rising demand, and poor management has made agriculture increasingly difficult across swaths of the globe,” The Guardian reports. That means billions of people could “face hunger and widespread chronic food shortages as a result of failures to conserve water resources, and to tackle the climate crisis.”

“We must take very seriously both water scarcity (the imbalance between supply and demand for freshwater resources) and water shortages (reflected in inadequate rainfall patterns), for they are now the reality we all live with,” said FAO Director-General Qu Dongyu. “Water shortages and scarcity in agriculture must be addressed immediately and boldly.”

While the report found that the United Nations’ 2030 Sustainable Development Goals are still within reach, it concluded “that much more needed to be done to improve farming practices around the world and to manage resources equitably,” The Guardian says.

The FAO said 50 million people in sub-Saharan Africa face severe drought every three years, with what The Guardian calls “catastrophic effects” for crops and pasture. Already, frequent droughts affect more than one-tenth of the world’s rainfed cropland and 14% of pastureland, and of the 20% of land under cultivation that receives irrigation, 60% is highly water stressed due different forms of mismanagement.

“Small-scale and farmer-led irrigation systems are often more efficient than large-scale projects,” The Guardian writes, citing the report. “Large-scale, state-funded schemes in Asia, for instance, have relied on tapping directly into groundwater, putting excessive pressure on that resource. But small-scale farmers around the world face extra difficulties, such as a lack of secure tenure over water rights, and little access to finance and credit.”

While research reports frequently point to the need to shift food consumption patterns as one part of the effort to get climate change under control, the FAO said that part of the transition will carry its own challenges. “As the world aims to shift to healthy diets—often composed of relatively water-intensive foods such as legumes, nuts, poultry, and dairy products—the sustainable use of water resources will be ever more crucial,” said Qu, who previously served as China’s vice-minister of agriculture and rural affairs. “Rainfed agriculture provides the largest share of global food production. However, for it to continue to do so, we must improve how we manage water resources from limited rainfall.”