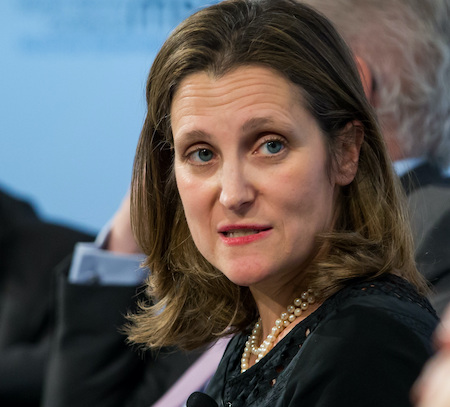 With Deputy Prime Minister and Finance Minister Chrystia Freeland due to release her long-awaited fiscal update today, the federal government is coming under new pressure to abandon the Trans Mountain pipeline expansion as an economic “white elephant” whose “justification has evaporated” given the threat it poses to Indigenous rights and endangered species.

Freeland’s update, her first as finance minister and the country’s first since March 2019, “is expected to offer more pandemic spending measures and stimulus projects with ‘green’ elements,” CBC headlines.

“Government sources (who are not authorized to speak publicly) tell CBC News the update will include new but time-limited spending measures to deal with the pandemic’s economic impact on specific industries and vulnerable Canadians, while laying the groundwork for the policy priorities listed in September’s speech from the throne,” the national broadcaster writes. “They also say the cost of the new stimulus will be in line with the percentage of GDP represented by other G7 countries’ pandemic plans.”

The news report also shows the government under pressure not to stray too far from business-as-usual fiscal strategy. “We’re expecting the update will be very pandemic-focused and that is good news,” said Business Council of Canada President and CEO Goldy Hyder. “Let’s make sure we are managing the crisis at hand and not…’re-imagining’ Canada.”

But among the various other possible reimaginings that have emerged from the pandemic experience and the focus on a just, green recovery, last week’s blockbuster Energy Futures report from the Canada Energy Regulator (CER) has brought another federal fiscal decision back into focus. That would be the one where Ottawa decided to spend C$4.5 billion to make every Canadian taxpayer an involuntary owner of a $12-billion pipeline project a Globe and Mail columnist is now declaring a “white elephant”.

The CER concluded the Canadian fossil industry will have no need for pipeline capacity from either Trans Mountain or the equally contentious Keystone XL pipeline if the federal government takes any further action on climate change—which Ottawa, in its own halting and hesitant way, has made clear it plans to do.

“If nothing else, the regulator made one thing abundantly clear: the pipeline era is over,” writes columnist Gary Mason. “Alberta Premier Jason Kenney and the federal Conservative party can now stop whining about how Bill C-69 is an existential threat to pipeline development in Canada. They can also ease up on the incendiary rhetoric about how the federal government’s ban on tanker traffic off the northern coast of British Columbia is another pipeline killer. That ship has sailed.”

Mason summarizes the CER report and surveys the growing accumulation of worrying news for anyone intent on resurrecting a deeply damaged fossil industry. “Today, the reality is that pipeline projects are being cancelled or delayed—likely permanently in some cases—all over the place,” Mason writes. “As [fossil] energy shares continue to plunge, investors are becoming increasingly wary about plopping their money down on endeavours that take decades to pay off, at the same time as climate change policies are aggressively pushing the energy sector away from fossil fuels.”

It’s an era when “there is more exposure for [fossil] investors than ever before,” he adds. “And in the case of Trans Mountain, those investors are Canadian taxpayers.”

“The CER and [Prime Minister Justin] Trudeau have previously justified the infringement of Indigenous rights and threatening of endangered species with the so-called economic benefits,” said Tsleil-Waututh spokesperson Rueben George. “With this new analysis, that justification has evaporated. If we are serious about climate action and reconciliation in Canada, construction on TMX must stop now.”

The Tsleil-Waututh and several other groups are calling on the federal government to “listen to the analysis and change course while only a small percentage of the Trans Mountain pipeline has been built,” North Shore News reports.

That didn’t stop Trudeau from doubling down on his commitment to the pipeline, the Globe and Mail writes. “We purchased the Trans Mountain pipeline expansion and are busy building it so that we get access to markets across Asia, because we cannot simply be prisoners of the American market,” he told CBC Radio Calgary Thursday morning. “I took a certain amount of challenges for that in some other parts of the country—for having bought and built that pipeline—but we have been committed to it from the beginning.”