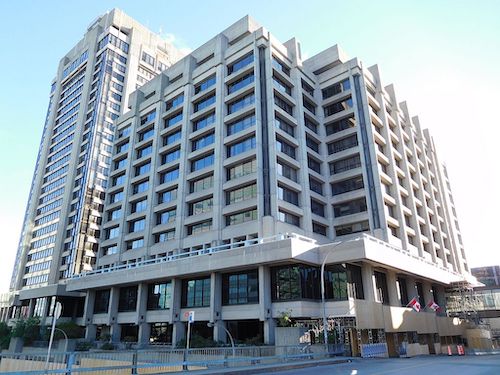 Building retrofits, more telecommuting, and a fleet consisting of 80% hybrid and electric vehicles by 2030 are among the highlights of a greening of government strategy unveiled yesterday by Treasury Board President Jean-Yves Duclos.

The draft plan “sets new, more ambitious targets to drive down the emissions produced by government operations through a ‘climate-resilient’ approach to the public service and its activities,” CBC reports. “The multi-pronged approach includes retrofitting buildings, procuring more electric vehicles, and staffing adjustments that will give public servants greater flexibility in deciding how and when they go into the office.”

The government is talking with public sector unions about how to make work-from-home practices driven by the pandemic a more permanent feature for federal employees, while “proposing greater flexibility in start times for workers so that more public servants can avoid rush hour traffic,” CBC adds. “Duclos said cutting the amount of time tens of thousands of federal workers spend in idling cars will result in lower emissions.”

Ottawa is also looking into carpooling as an option, and at “replacing its massive fleet of vehicles with more fuel-efficient options.”

“Obviously, no one wanted a pandemic, we all want the pandemic to be over,” Duclos told the national broadcaster. “That being said…once we get through it there will be lessons learned, and that will include lessons on how to improve the productivity of public servants” by introducing new “work arrangements” for some staff.

More broadly, “by adopting low-carbon solutions for our buildings and fleets, using sustainable products, reducing the unnecessary use of single-use plastics, and purchasing greener power, the government of Canada is taking more assertive action and demonstrating real and measurable results,” he said in a release yesterday. “Our goal of a green government within a green and resilient economy will benefit Canadians now and in the future.”

The federal government “is the largest public purchaser of goods and services in the country with purchases of more than C$20 billion a year,” the Treasury Board Secretariat added in a fact sheet accompanying the announcement. “By including this procurement in our GHG reduction targets, the government will help make the transition to a circular, net-zero emissions economy. This will be achieved through green procurement based on life cycle assessment principles, as well as through the adoption of clean technologies and green products and services.”

The news report helps illustrate why observers and analysts have been urging Ottawa for years to use its procurement power to help drive the market for low-carbon products.

“The government owns 20,000 cars and trucks. The new green plan stipulates that, by 2030, 80% of all the vehicles used by the federal government must be either hybrid or entirely electric,” CBC writes. “And in what amounts to a first for any government anywhere, the green plan will impose the same standards on cars used by the Royal Canadian Mounted Police and the Canadian Armed Forces—with some notable exceptions for tactical vehicles and tanks that don’t yet have electric equivalents.”

While tanks, fighter jets, and ships will be exempt from the new policy, “cars used on military bases or by Mounties on patrol will need to be hybrid or electric,” CBC adds.

The news story also points to an energy-saving option that has been visible for decades, but Ottawa still hasn’t managed to tap into: “Even with a great many public servants working from home due to the pandemic, the lights are still on in many of those offices, with few actually working at a desk,” CBC writes.

“There is indeed a lot of waste to be reduced in the use of buildings,” Duclos said. “I’m now sitting in my office, I do see lights on in a lot of government buildings,” and “clearly they could be turned off without any significant impact on the quality of the workplace.”