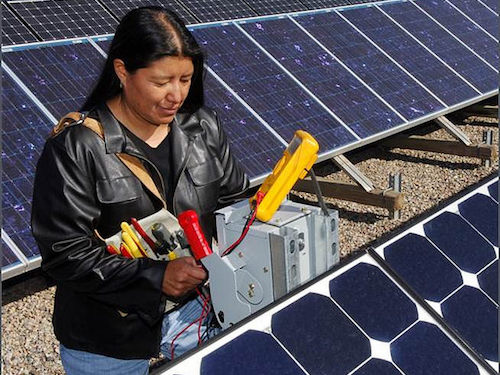 Across nearly a dozen pieces of news and analysis over the last week, a consistent theme is emerging: Canada’s fossil sector crash is accelerating, the renewable energy industries are beginning to surge, and oil-producing provinces like Alberta and Saskatchewan need a whole new narrative if they’re going to catch up, keep up, and thrive in an emerging, low-carbon world.

In two separate stories last Wednesday, CBC caught both sides of the squeeze facing fossil communities everywhere: the oil and gas industry is in the throes of its worst year ever, just as the era of cheap wind and solar arrives.

“After struggling for the last five years with low commodity prices, the oilpatch is expected to have its worst year for drilling activity ever recorded,” the national broadcaster reports, citing data from the Canadian Association of Oilwell Drilling Contractors. CAODC President Mark Scholz remembered one day in mid-June when there were only six oil and gas drilling rigs operating in all of western Canada—the lowest since the country’s first commercial oil discovery in 1947, and a stunning drop from the 5,545 wells that were drilled last year.

Now, CAODC expects to see 3,296 wells drilled in 2020 and 3,771 in 2021. But last week, 115 were operating, CBC says. Fossil megaprojects have been cancelled or put on hold, thousands of oilfield service workers have lost their jobs, and “companies of all sizes are struggling to turn a profit”.

The story is the mirror image opposite in the renewable energy industries, with economist Blake Shaffer of the University of Calgary School of Public Policy pointing to Alberta as a prime focus for new development.

“From 10 years ago, solar prices have dropped by 90%,” he said, citing a new analysis he released last week along with three colleagues. “Wind has fallen by about 70%. So when I say prices have come down, it’s not just a little bit. These are massive declines.”

For all that the two western provinces have been hurting in a years-long fossil downturn, Shaffer pointed to two important advantages—Canada’s best solar resource in Alberta and southern Saskatchewan, and competitive electricity markets—that make the shift to renewables a major opportunity.

“Most other power markets in Canada are government-run monopolies. So they’re either buying, in which case it’s great for a developer, or they’re not,” he told CBC. “Whereas here we have this open, competitive market. So if the price is right, people will come. And that’s what we’re seeing right now.”

Shaffer cited the intermittency of renewable energy sources as a continuing challenge, identifying demand response as an important part of the solution. But the financial community is beginning to pay serious attention to the emerging trend. “Canadian renewable utility stocks have soared this year as investors bet on a global expansion of cleaner power, abandoning oil and gas stocks that have plummeted because of pandemic travel restrictions,” Reuters reports. “Canadian renewables have become a landing spot for investors looking for wind, solar, and hydro plays.”

Investors “recognize oil and gas is a sunset sector,” said Toronto-based financial planner Tim Nash. “It’s not going away anytime soon, but they don’t expect any growth long-term.” With many Canadian renewables generators running most of their capacity outside the country, often in partnership with fossil companies, analysts at CIBC expect their business to grow “at similar or higher rates than global peers,” Reuters writes.

Spinning off from the University of Calgary study, CBC business columnist Don Pittis profiles some of the entrepreneurs in Alberta and Saskatchewan who aren’t letting slow government action keep them out of the emerging renewable energy boom. He cites the Three Nations Energy project in Fort Chipewyan, Alberta wind and solar developer Greengate Power, Deep Earth Energy Production (DEEP), and Liricon Capital as companies that are translating fossil industry skills into everything from solar and geothermal development to a proposed rail line to combat traffic congestion in Banff.

“Here’s the irony that I love,” said former oil and gas geologist Kirsten Marcia, now CEO of DEEP. “I love the fact that we wouldn’t even know that this wonderful, clean geothermal energy resource existed if it weren’t for the oil and gas industry exploring for fossil fuels.”

Dave Sawyer, principal economist at the Canadian Institute for Climate Choices, strikes a similar note in a recent post for Policy Options, calculating that Canada’s “clean energy gazelles” are outperforming fossil fuels, while expanding their exports at three times the rate of other product categories.

“There seems to be a view that Canada can’t compete in a global low-carbon economy,” he writes. “After all, who will want Canada’s fossil fuels or internal combustion engines as the world transitions towards net-zero by mid-century?” But there’s a reality that set of assumptions ignores: “Simply put, Canada is already competing and winning when it comes to clean energy,” based on trade data for a list of 138 export products that Sawyer divides into six categories: clean fuels, mined clean energy materials, clean electricity and power equipment, clean industry, clean transport, and energy efficiency.

Contrast the growing wave of renewable energy optimism with the steady stream of news from the fossil sector, with the Organization of Petroleum Exporting Countries (OPEC) projecting weaker oil demand in 2021, CAODC and the Petroleum Services of Canada both forecasting a slow year, and U.S. pipeline operators struck in what Reuters calls a “climate trap” as their infrastructure ages and public opposition mounts.

“As authorities worldwide face the challenge of a smooth transition to a lower-carbon future, [fossil] energy firms are wrestling with investment decisions to keep their businesses running and prevent supply disruptions,” the news agency writes. But “to speed up the extraction of what remains is an insane strategy,” said Anne Woiwode, co-chair of the U.S. Sierra Club’s Michigan chapter. “We need to have something that replaces that energy source in the future, and we don’t have it as long as people are continuing to rely on oil.”

The combination of fossil industry stress and renewable energy opportunity has Canmore, Alberta-based political and communications strategist Stephen Legault suggesting his province needs a new narrative. Whether or not the current storyline about a hard-working, self-reliant province built on bitumen is a fair and complete rendition of Alberta’s past, he writes, the question is whether it will carry anyone into the future.

“Albertans are being hit by the triple whammy of COVID-19, climate change, and an economic nightmare deepened by slumping oil prices,” Legault says. “At our own peril, we buy into the same old stories, refusing to accept how quickly the world is transitioning toward a net-zero energy economy, and the consequences that COVID-19 will have on that transition.”

Even before the pandemic, he adds, “much of the world’s attention was on the massive shift away from carbon-based fuels and toward renewables.” Now, “our story of ourselves as Albertans continues to get in the way of our ability to capitalize on that transformation.”

To shift narratives, Legault suggests holding onto the parts of the Alberta story that still make sense—”our resourcefulness, our capacity for ingenuity, and our hardworking, entrepreneurial spirit”—and build the rest from there.

“Here’s what it could sound like,” he suggests. “Alberta, having pivoted from the trajectory of its past, is a place that invests in its people and its priorities of creating clean energy that the world needs, and will need so much more of tomorrow. Albertans take to a new kind of frontier, harnessing the energy of our industries, our business leaders, and our creative talents to become innovators once more, solving the world’s energy challenges and, in doing so, becoming global leaders in the low-carbon economy and all that comes with it. Armed with this new prosperity, we get our sense of self-worth back as we rebuild a prosperous society while banishing the concern that others don’t respect us—because we know the world does.”