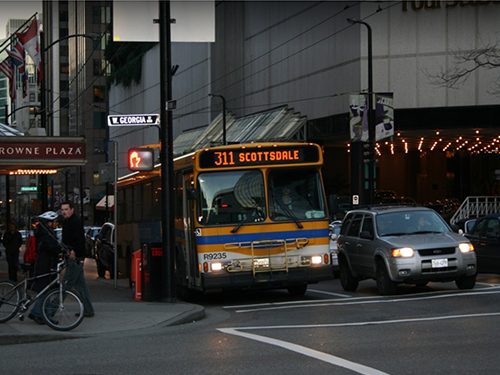 Two Vancouver policy experts are offering opposing views of the city’s proposed downtown driving congestion charge, with one saying the idea is rife with equity concerns, and the other countering that the proposal is fundamentally driven by a concern for equity itself.

While details of Vancouver’s newly-minted Climate Emergency Action Plan have yet to swing into focus, one of the proposals contained in the plan is already coming under heavy criticism, reports the Canadian Press. Namely, its declared intention to charge citizens a toll for driving into the downtown core.

In response to such critiques, transit analyst Todd Litman of the Victoria Transport Policy Institute—who contributed his expertise to crafting the new climate plan—said the proposed toll is not intended as an attack on drivers’ wallets, but as an effort to protect and improve individual and collective well-being.

“Most people can’t imagine they could be better off living a less automobile-dependent lifestyle, even though, when people actually experience it, they prefer it,” he told CP.

While the proximate target of the City’s proposed attempt to reduce car use is the climate crisis (“almost 40% of Vancouver’s carbon pollution comes from vehicles,” notes CP), Litman said the plan’s vision of what a car-free life could be for its citizens goes much further. Considering that car ownership consumes, on average, 20% of a household budget, Litman said, going car-free results in more money to spend on other things.

On the other side of the issue, urban policy expert Andy Yan, director of Simon Fraser University’s City Program, told CP he is troubled by the fact that the plan took inspiration from similar policies crafted by city leaders in London, Singapore, and Stockholm.

“I think one of the big challenges is that we are neither Singapore, Stockholm, or London,” said Yan. He argued that, unlike those cities, Vancouver does not have a sufficiently robust transit network connecting the core with outlying areas.

Noting that 45% of the people who work in Vancouver’s core live in the suburbs—and suggesting that least some of those commuters were pushed out to the hinterland as housing prices skyrocketed—Yan warned that charging drivers to enter the city’s core might prove a “sizable burden” for some.

While public transit—and not private cars—remains the chief mode of travel for minority communities (including Indigenous people and new immigrants), as well as women and the poor, Yan worries that penalizing car use could create just another stumbling block to the success of those populations, who are also notably underrepresented in the contingents of commuters who walk or cycle.

With issues like longer commutes and inadequate workplace facilities working against efforts to get people onto two wheels or their own two feet, congestion charges cannot be put in place without a corresponding effort to support affordable housing and world-class transit networks, he added.

Necessary to any such ambitious transit project is heavy spending on infrastructure, and subsidized fares for those who need it, said UK transportation historian Christian Wolmar. “You need somebody with courage to implement it,” he told CP.