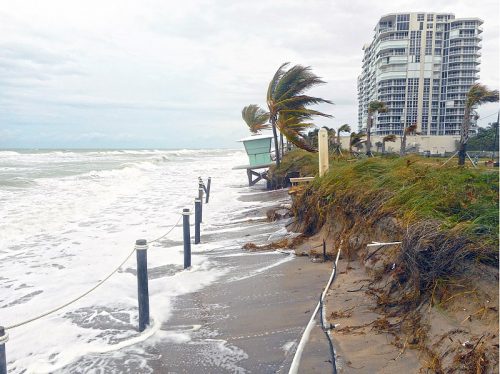 The rate of annual sea level rise is accelerating, with a new study pointing to a 10-year pace that is 50% higher than the long-term average embedded in the most recent assessment by the Intergovernmental Panel on Climate Change in 2014.

The previous calculation of 3.2 millimetres per year was based on satellite measurements dating back to the early 1990s, but “the global rate varied so much over that period that it was hard to say whether it was holding steady or accelerating,” Science Magazine reports. But now, it’s clear that “it was accelerating, big time,” with a 10-year average compiled by NASA Jet Propulsion Lab ocean scientist Benjamin Hamlington showing an annual rate of 4.8 millimetres.

“Hamlington and colleagues first reported signs of the speedup in 2018 in the Proceedings of the National Academy of Sciences,” Science writes. “Since then, they and others have become more confident about the trends.” The story cites  a 2019 study in the journal Nature Climate Change, in which a team at Old Dominion University led by physical oceanographer Sönke Dangendorf calculated 20 centimetres of sea level rise since 1900, using earlier tide gauge readings to supplement satellite data.

“The team’s data show that, after a period of global dam building in the 1950s that held back surface water and slowed sea level rise, it began to accelerate in the late 1960s—not the late 1980s,” when drivers of sea level rise like thermal expansion of ocean water and melting glaciers and ice sheets were thought to have kicked in.

The news story summarizes some of the detailed questions researchers are asking about sea level rise. One study, led by climate scientist Aimée Slangen, of the Royal Netherlands Institute for Sea Research, aims to predict when levels will rise 25 centimetres above 2000 levels and make 100-year storms a near annual occurrence.

“In unpublished work, Slangen finds that the threshold will be reached sometime between 2040 and 2060,” Science writes. “Efforts to slow climate change won’t do much to postpone it given the inertia of ocean warming and ice melt, though they could forestall much greater increases later in the century.”

That nearer-term threat, Slangen said, is “quite good for decision-making.”

For Dangendorf, who now works at a university in Norfolk, Virginia, the impacts are that much more immediate. “I watch coastal flooding every week,” he said. “I see it from my balcony.”