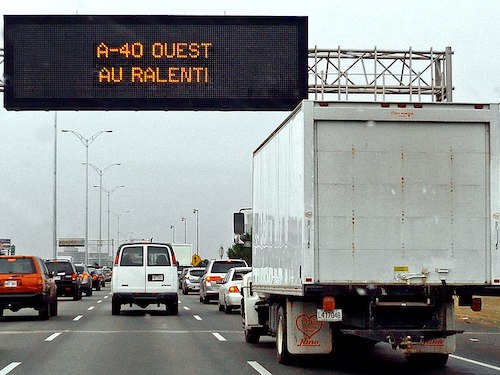 The Quebec government may have nabbed some early headlines by tipping the centrepiece of its Green Economy Plan, a 2035 phaseout of internal combustion vehicle sales. But once the full strategy was released Monday, climate analysts and campaigners quickly concluded that it won’t meet the province’s greenhouse gas reduction targets.

Over the course of the five-year plan, most of the C$6.7 billion in the provincial announcement will be devoted to subsidizing electric vehicle purchases, CBC reports. But “climate change experts and environmental activists say that won’t be enough to put the province on track to meet its goal of reducing greenhouse gas emissions by 29 million tonnes of CO2 by 2030. They say more money should be invested in public transit and climate change mitigation.”

While the 29-megatonne reduction “remains Quebec’s stated goal, the plan only identifies a series of measures that will result in a reduction of 12.4 million tonnes of CO2 by 2030, according to the government’s own accounting,” the national broadcaster adds in a separate dispatch. “The 17.4-million-tonne difference will be achieved through unspecified technological advancements and a contribution from the federal government, also unspecified.”

“First observation: the plan for a green economy will not make it possible to achieve the GHG reduction targets set by the Government of Quebec,” said Université du Québec en Outaouais professor Jérôme Dupras, the Canada research chair in environmental ecology.

“By itself the plan won’t be enough to address the challenges presented by the climate crisis,” Équiterre agreed.

“I wish we could have seen something about reducing our consumption,” said ENvironnement JEUnesse (ENJEU) Executive Director Catherine Gauthier. “For now, we haven’t seen any such ambition in the plan.”

“We are at a decisive turning point, and the Legault government has the power to set the direction of change,” added 14-year-old ENJEU organizer Aya Arba. “The current pandemic has proven to us that in a crisis that threatens lives, the government can act boldly to limit the damage. And that the population knows how to show solidarity and patience. As soon as the COVID-19 alarm bells rang, you took action. In the face of the threat of the climate crisis, we need radical and bold changes. I’m afraid this new plan is nothing more than words. ”

“The Legault government had a chance to make history by making the choices that were necessary for the health and safety of our children,” said Anaïs Barbeau-Lavalette of Mères au front/Mothers Step In. “The plan lacks the political courage sought by young people who quite rightly fear for their future.”

With 40% of the province’s emissions coming from transportation, Greenpeace Canada climate and energy campaigner Patrick Bonin called for more provincial funding for public transit, including completion of Montreal’s Réseau express métropolitain (REM) light rail network. “We will need much more metros, tramways, bus lanes, possibly an extension of the REM to make sure public transit is more competitive,” he said.

Citing Samuel Pagé-Plouffe, head of public affairs at Vivre en Ville, CBC says another a big gap in the plan is its failure to force a rethink of the suburban dream. That includes the way car ownership of any kind drives highway construction, urban sprawl, and more spacious suburban homes that “eat into precious green space” and need more energy for heating and cooling.

But addressing that challenge “is not something the government is interested in doing,” CBC writes. “It was elected, after all, by suburban and rural voters on a platform almost completely shorn of environmental policy.” While environmental groups had urged the government to use higher gas taxes or other fiscal measures to discourage driving, Environment Minister Benoit Charette suggested Monday those ideas were disconnected from public sentiment.

“It’s easy to have a negative judgment of cars when you live in a very urbanized environment, where the grocery store is two blocks away, and the school is on the next block,” he said. “But that’s not the reality of a majority of Quebecers.”

But despite the critical reaction within the province, Globe and Mail climate columnist Adam Radwanski still sees the Quebec plan as a wake-up call for the rest of the country.

“Most anywhere else in Canada, this announcement would have qualified as revolutionary,” he writes. “Other than in British Columbia, no current provincial government is taking anywhere near this degree of responsibility in the fight against climate change.”

Even if other provinces point to the large hydro resource that gives Quebec a surplus of electricity, “this announcement should put pressure on other Canadian premiers to start introducing similar policies of their own,” Radwanski adds—especially zero-emission vehicle mandates. “And if they prove unwilling to do so, the prospect of a growing national imbalance will strengthen the case for some new forms of federal intervention by Prime Minister Justin Trudeau’s government.”