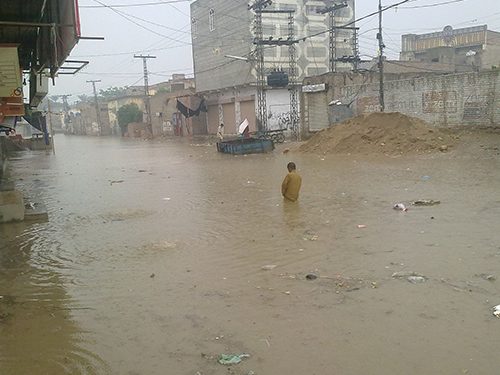 Scientists are declaring 2020 a record year for the Atlantic hurricane season, as Hurricane Iota follows Hurricane Eta to inflict a double hit on Nicaragua and other parts of Central America.

“The evidence of the influence of the climate crisis is not so much in the record-breaking 30 tropical storms in the Atlantic so far this year, but the strength, rapid intensification, and total rainfall of these weather systems,” The Guardian reports. “Hundreds of thousands of subsistence farmers across the region have lost everything in flooding caused by Eta, which made landfall in Nicaragua as a Category 4 hurricane on November.” With Iota’s arrival earlier this week, “even more could find themselves in the same situation.”

That’s consistent with what climate science has been saying about the impact of climate change in driving more frequent, severe storms.

“The warmer ocean waters that climate change brings are expected to make the stronger storms stronger and make them rapidly intensify more frequently and at a greater rate,” said meteorologist Dr. Jeff Masters. “These things have already been observed, particularly in the Atlantic, and it’s going to be increasingly so in coming decades.”

The hits have been particularly hard in Central America’s “dry corridor”, where the climate crisis “has meant more frequent, prolonged, and intense droughts as well as heavier rainfall when it does come, often causing flash flooding that washes away crops,” The Guardian writes. “Subsistence farmers in the region have struggled to adapt to the new reality, and many in the region have simply given up and left. The climate crisis—and the hunger it brings—is increasingly being recognized as a major driver of emigration from the region.”

The day after the Guardian report, Hurricane Iota brought “catastrophic winds and pounding rains” as it “made landfall as an intense Category 4 at 10:40 PM Monday in northeastern Nicaragua,” the Washington Post writes. The storm arrived just 15 miles south of the point where Hurricane Eta made landfall just two weeks earlier. Hurricane season has devastated the region “at a time when it is also struggling from the socio-economic consequences of the coronavirus pandemic, which is compounding poverty and food insecurity there.”

By Tuesday, the “strongest storm on record this late in the year” had weakened to a tropical storm. But Iota still brought sustained 65-mile/104.5-kilometre-per-hour winds to the central part of the country, “leaving a deadly wake of inundated towns, damaged shelters, and snapped trees and power lines in a region still reeling” from the previous destruction.

Iota killed at least one person on the Colombian island of Providencia, where it hit as a devastating Category 5 hurricane, and two children drowned in Nicaragua. “The damage, which we could appreciate from the overflight, is the destruction of practically 98 to 99% of the infrastructure,” Colombian President Iván Duque told media after personally surveying the damage on Providencia and the island of San Andrés.

The Post says the Nicaraguan government evacuated 40,000 people before the storm landed and deployed 3,500 health workers, 2,350 police officers and 365 firefighters to the hardest-hit areas. “Almost the entire country is in a national emergency, because it has been one hurricane after another, and this impacts all of Central America,” said President Daniel Ortega.

“Damage in and around the coastal commercial hub of Puerto Cabezas, 30 miles north of where the storm made landfall, included roofs ripped off homes and fallen trees and power lines,” the Post adds, citing a senior Nicaraguan official. “Puerto Cabezas residents warned that packed shelters were running out of supplies and that transportation through the streets was impossible, according to local media reports. Telcor, the state telecom company, reported that Puerto Cabezas and the surrounding area were without cell phone service after its central command centre was flooded. The roof came off a makeshift hospital, forcing authorities to move patients to a government building.”

Doig: For 1.2 Billion People, Decarbonization is a Matter of Survival