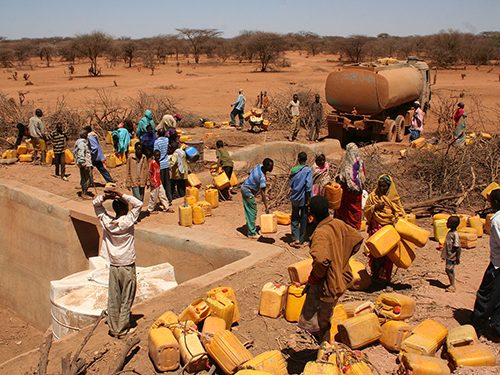 If greenhouse gas emissions keep rising at their current pace, Cape Town faces the very real risk of seeing another “Day Zero”—a drought so serious that the taps run dry—by the year 2100. And other dry regions in Australia, Europe, South America, and California could well follow suit.

Ever since the South African capital experienced its first Day Zero scare in 2018, officials have been working on ways to avoid similar water crises in the future, reports the Thompson Reuters Foundation. Recently, researchers from Stanford University and the U.S. National Oceanic and Atmospheric Association (NOAA) joined in, using high-resolution simulations to estimate the role the climate crisis could play in future droughts around the world.

The answers were daunting. Citing lead author Salvatore Pascale, Thompson Reuters reports  that, “in the worst-case scenario, events like the Day Zero drought may become about 100 times more likely than they were in the early 20th century world.”

The NOAA study, published in the Proceedings of the National Academy of Sciences, found that “a drought as severe as Day Zero could occur two or three times in a decade in southwestern South Africa,” with Cape Town facing “an 80% higher chance of another Day Zero drought by the end of the century” if the status quo on emissions is maintained.

In 2018, Cape Town managed to avert complete disaster through aggressive last-minute conservation efforts, adds Thompson Reuters. Now, officials are working hard to prevent, rather than reacting, by “increasing the use of groundwater, building a desalination plant, clearing water-hungry invasive plants, and working toward a water reuse scheme.”