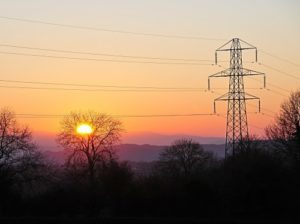 A designer in South Korea has come up with a prototype for a new, 12-storey vertical-axis wind turbine (VAWT) that could be located in urban areas and deliver up to four times as much power as a standard, ground-mounted wind machine.

Odin Energy’s circular tower concept “can have up to 12 floors, each containing a central VAWT, allowing for much greater energy production per unit of area than would be possible with a single turbine,” Greentech Media reports. “As well as increasing total rated power, the company says the upper floors of its Odin towers can access higher wind speeds,” which accounts for their higher output.

Vertical-axis designs date back at least to the 1970s, but the vast majority of wind turbines now in production have a horizontal axis on which the blades rotate vertically. Greentech says the Odin prototype, installed on South Korea’s Jeju Island in 2011 and tested between 2015 and 2017, delivers 62% greater power efficiency than a stand-alone turbine and “is almost silent in operation, making it suitable for urban environments.” [And for rural areas where anyone is inclined to object to wind turbine noise—Ed.]

Odin founder and vice-president Soo Yun Song said the company sees its devices as an opportunity to convert island grids to renewable energy, and wants to integrate them in a zero-energy building initiative in the Seoul metropolitan area. The ability to install the VAWTs atop buildings “is one strength that we think we have [compared to] other wind technologies,” company advisor Hyokon Zhiang told Greentech.

Odin’s supplier for the individual 19-kilowatt towers, Italian manufacturer Ropatec, says it may also have lined up a customer in that country’s construction industry.

At US$90 per megawatt-hour, the cost of a 10-storey tower would come in considerably higher than the going rate for onshore wind, which Greentech quotes at just $26 to $54/MWh. But Odin Energy doesn’t see itself as direct competition for those machines. Rather, the design is “likely to appeal to urban developers or companies tasked with building island microgrids, both environments where space might be at a premium and the low noise profile of Odin towers could be an asset,” the industry newsletter states. “In island settings, Zhiang said, Odin towers would probably compete with diesel generation,” which the latest calculations by Lazard place at $197 to $281/MWh, before factoring in the health and climate impacts of diesel.

In cities, Zhiang sees the cost of the technology being offset by commercial or industrial applications, including electric vehicle charging, on the lower floors of a tower.

It is really encouraging to see how green energy modalities like wind power continue to evolve through innovation and investment. I love the vertical wind towers; lots of potential there I’m sure!

I’m so happy to (virtually) hear you say that you love vertical wind towers. Me too! I think this means I don’t get out enough, but I get really nostalgic about the old eggbeater design from the 1970s. Yeah, I know, they won’t go to eight megawatts or install offshore, and we need the higher output. But that’s why it was absolutely certain I would notice and want to amplify the Greentech story about the Odin Energy prototype.