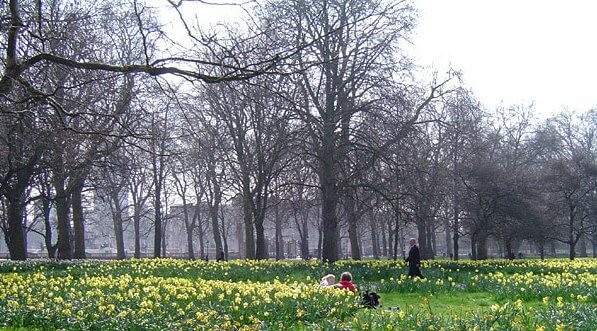 Green Park: Green space at the heart of London. Image: By ChrisO

LONDON, 16 November, 2020 − A vast study of the incidence of heart disease, the amount of green spaces and air quality in each county of the United States has shown that the presence of trees, shrubs and grass saves lives.

It has long been known that particulate matter from industry and car exhausts is bad for lungs and hearts. While it is also accepted that the greenery absorbs pollution, it has been hard until now to relate the extent of the two effects.

Using the data collected by NASA from satellites to calculate the greenness of vast areas of the US, the researchers compared it with the national death rates from the Atlas of Heart Disease.

They overlaid this with data from the Environment Protection Agency’s air quality measurements of particulate matter for each county and the Census Bureau’s information on age, race, education and income by county.

Using an internationally recognised system to measure the amount of green vegetation in any location, from a barren area of rock at one extreme (0.00 on the scale) to dense tropical rain forest (0.80) at the other, they found a measurable link between greenness and survival rates.

“We found that areas with better air quality have higher greenness, and that having higher greenness measures, in turn, is related to having a lower rate of deaths from heart disease,” said William Aitken, a cardiology fellow with the University of Miami Miller School of Medicine, Florida.

“Given the potential cardiovascular benefits of higher greenness measures, it’s important that dialogue about improved health and quality of life include environmental policies that support increasing greenness,” he said.

The research is significant in the battle against climate change too. Asian countries, particularly India and China, have severe problems with early death and disease as a result of air pollution. They have concentrated their efforts for reducing air pollution by reducing traffic and suppressing coal burning.

It is clear from this research that they could both remove particulates from the air and reduce the amount of carbon dioxide in the atmosphere by increasing the amount of vegetation in polluted areas.

The US researchers hope their results will encourage clinical trials using built environment interventions (e.g., tree planting to increase the presence of vegetation) to improve cardiovascular health. “We will be performing a longitudinal study in Miami to assess if changes in neighbourhood greenness over time are associated with changes in cardiovascular disease,” Dr. Aitken said.

Commenting on the research Joel Kaufman, a volunteer expert for the American Heart Association and a professor of environmental and occupational health at the University of Washington, Seattle, said in addition to the actions that individuals could take to ensure healthy lives, such as not smoking, being physically active and controlling cholesterol, environmental factors had turned out to be very important.

Ambient air pollution from burning fossil fuels is one of the major factors. Research over 20 years has shown that living in areas with higher concentrations of air pollutants, and breathing in the pollution, leads to higher rates of cardiovascular disease. Demonstrably, green spaces matter.

Dr Kaufman said that community-led action had mostly been directed at increasing controls over the sources of air pollution affecting the environment. But another effective approach would be to increase the level of greenness, planting trees, shrubs and grass.

In a statement the American Heart Association said long-term exposure to air pollution reduced life expectancy by between several months and a few years, depending on its severity. Cutting pollution improved the health and life expectancy of those living in the area quite quickly. − Climate News Network