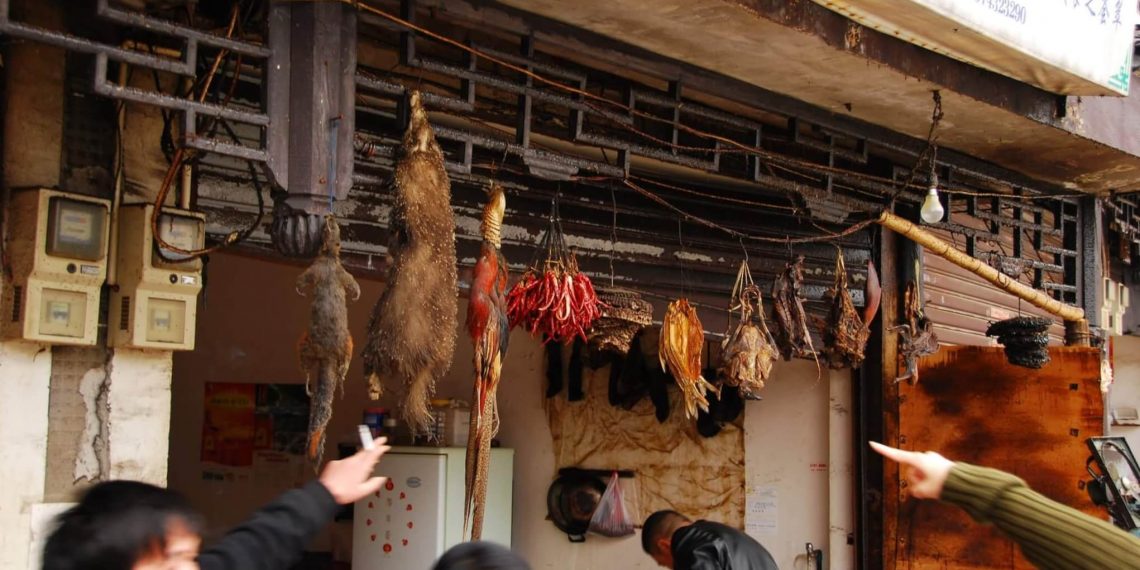 On sale in China: Bushmeat

There will be more avoidable pandemics, more devastating and lethal, as humans intrude further upon the planet’s forests.

LONDON, 11 November, 2020 − Once again, naturalists have warned that the invasion of wilderness can seriously damage human health: avoidable pandemics − Covid-19 is an instance of a disease transferred from wild mammals to humans − threaten to arrive more often, spread more rapidly, do more damage to the global economy, and kill more people.

That’s because the odds on even more fearful infections remain very high: the world’s wild mammals could between them be hosts to 1.7 million viruses that have yet to be identified and named. If only a third of them them could infect humans, that’s 540,000 new diseases waiting to happen.

The number could be higher: perhaps 850,000 potential infections lie so far undisturbed, waiting to happen.

A new report by a team of 22 global experts warns that Covid-19 is at least the sixth global health pandemic since the Great Influenza Epidemic of 1918: all had their origins in microbes carried by animals, and all were awakened and spread by human interaction with the wilderness.

By July 2020, the coronavirus linked to a market in wild animals in Wuhan in China had spread around the planet at a cost of between US$8 trillion and $16tn. The world has already seen the Ebola virus devastating West African communities, the HIV/Aids epidemic, Zika, and many others claiming lives in the last century.

The arrival of new zoonotic diseases − infections caught from other creatures − has been counted at roughly two a year since 1918. The number could increase to as many as five a year. And most of them will be linked to increasing human impact upon what had once been largely undisturbed wilderness.

“There is no great mystery about the cause of the Covid-19 pandemic − or of any modern pandemic”, said Peter Daszak, president of EcoHealth Alliance and chair of a workshop of the Intergovernmental Science Policy Platform on Biodiversity and Ecosystem Services (IPBES for short) that assembled the research.

“The same human activities that drive climate change and biodiversity loss also drive pandemic risk through their impacts on our environment. Changes in the way we use land; the expansion and intensification of agriculture; and unsustainable trade, production and consumption disrupt nature and increase contact between wildlife, livestock, pathogens and people. This is the path to pandemics.”

All living things are host to viruses and other microbes: in most cases host and parasite adapt to live peaceably with each other. The danger comes when a microbe transfers to a new host that is entirely unprepared for the invader.

“We still rely on attempts to contain and control diseases after they emerge. We can escape the era of pandemics, but this requires a greater focus on prevention”

What became known as the human immuno-deficiency virus HIV-1 is believed to have emerged first in West or Central Africa from the remains of chimpanzees hunted and sold for bushmeat. It spread around the planet within a decade, to claim millions of lives as the disease AIDS. Ebola infects both primates and humans: in an outbreak among humans, it has been known to kill 90% of all infected people.

Researchers have consistently linked epidemic and pandemic outbreaks to climate change, to the destruction and degradation of the wilderness, and to the traffic in wild creatures as objects of value or commerce.

And all are consequences ultimately of exponential growth in human numbers in the last century, a growth that puts ever greater pressure on what had once been largely undisturbed tropical forest, grassland and wetland.

Around a quarter of all wild terrestrial vertebrate species are traded globally. International, legal wildlife trade has increased fivefold in revenue in the last 14 years. It is now worth an estimated $107bn.

The illegal traffic in wildlife could be worth anywhere between $7bn and $23bn annually. The US imports around 10 to 20 million wild animals a year. In China in 2016, what is now called wildlife farming employed 14 million people and generated $77bn in revenue.

Researchers have already argued that intrusion into what should be protected ecosystems that are home to the shrinking pool of wild birds, mammals, reptiles and amphibians − a million species could be nearing global extinction − not only threatens the wellbeing of the planet; it also generates an increasing health hazard.

The latest study lists a range of policy options to reduce the risk of assault by new plagues. These rest upon greater awareness of, and respect for, the natural capital of the wilderness. Conservation of this kind costs money, but at least 100 times less than the toll of successive pandemics likely without a change in human attitudes.

“We have increasing ability to prevent pandemics, but the way we are tackling them right now largely ignores that ability,” Dr Daszak said. “Our approach has effectively stagnated − we still rely on attempts to contain and control diseases after they emerge, through vaccines and therapeutics.

“We can escape the era of pandemics, but this requires a greater focus on prevention in addition to reaction.” − Climate News Network