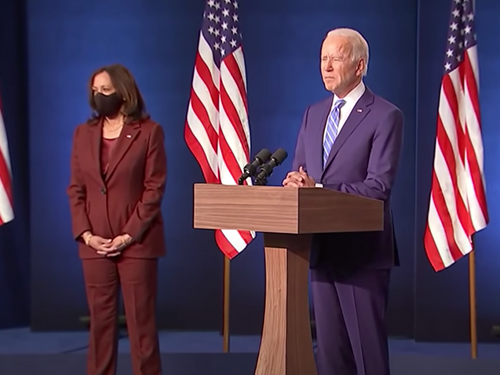 President-elect Joe Biden’s convincing election win last week “likely spells the end of the Keystone XL oil pipeline,” The Canadian Press reports this week, even as the Trudeau government pushes the controversial and beleaguered project to the “top of the agenda” for its rebooted relationship with the United States.

CP has Harper-era cabinet minister John Baird and Calgary fossil advocate Richard Masson both acknowledging that Keystone will likely be history once Biden and Vice-President-elect Kamala Harris are sworn in January 20. And 350 Canada is out with an open letter supporting Biden’s promise to cancel Keystone during his first 100 days in office.

“Canada has the chance to work with the United States to tackle the climate emergency,” and “we shouldn’t waste this opportunity by pushing for a pipeline that people don’t want and the planet can’t handle,” said Canada Campaigns Director Amara Possian. “There is no better time for Justin Trudeau to change his tune on Keystone XL and get on the right side of history.”

But there was no immediate sign of a change of heart, with the federal and Alberta governments both lining up to fight for the 1,950-kilometre pipeline after Prime Minister Justin Trudeau became the first national leader to speak with Biden and offer his congratulations.

“This is top of the agenda,” Foreign Affairs Minister François-Philippe Champagne told the CBC public affairs show Rosemary Barton Live. “We’re going to be making our case, saying that Canada is the most reliable energy supplier to the United States, predictable, we’ve been working together for, for decades now. It’s all about energy security in North America.”

Click here for our Special Report on climate and the U.S. election

“We will be working very closely with the federal government to emphasize the strong case for Keystone XL with the incoming U.S. administration, and have in fact already been discussing our joint approach with Ottawa,” wrote Kavi Bal, press secretary to Alberta Energy Minister and former pipeline executive Sonya Savage, in an email to the Globe and Mail.

But they’re facing an uphill fight. “I really fear we’re in trouble on Keystone,” said Baird, now a senior advisor with law firm Bennett Jones. “This is something he can do with the stroke of a pen, and I’m deeply concerned that he will revoke the presidential permit.”

Richard Masson, executive fellow with the University of Calgary’s fossil-friendly School of Public Policy, agreed that Biden will likely cancel the permit before next summer’s construction season, adding that Alberta fossils will have enough pipeline capacity with existing infrastructure plus two other projects now under construction—the equally controversial Line 3 replacement and Trans Mountain pipeline expansion.

TC Energy spokesperson Terry Cunha said the company won’t be adjusting its plans in light of the election result. “Construction activity continues to take place,” he told CP. “As we wind down some activity due to the harsher winter weather in many areas across our footprint, it was planned for and is a normal part of the process when building large, multi-year infrastructure projects.”