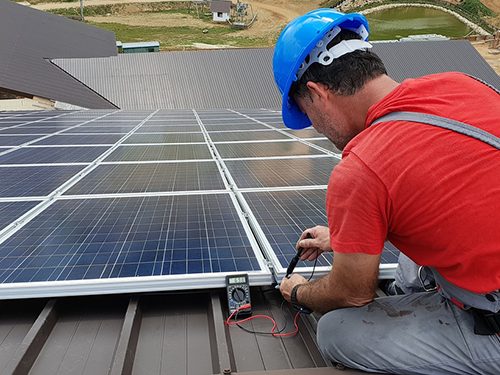 If every public school in the United States went 100% solar, the resulting emissions reductions would be equal to shuttering 18 coal-fired power plants. And, as one Arkansas school district recently proved, the money saved on energy costs could translate into higher pay for teachers.

The number of public school students attending schools equipped with solar panels has increased 81% since 2014, writes Climatewire, in a post republished by Energy News Network.

“In 2019, 16% of U.S. school districts (home to about 5.3 million students) had installed a total of 1,337 megawatts of solar capacity,” it the publication states. But standing in the way of that remaining 84% are “policy roadblocks, financing complications, and unease in some communities about opting for a non-traditional energy source.”

One of the policy shifts that has had the greatest effect in boosting uptake among U.S. schools has been allowing solar developers to “use power purchase agreements to finance, build, and maintain arrays on a customer’s property,” said Generation180 Program Director Tish Tablan. The approach allows a customer to pay the developer “for the energy that the panels produce over a period of time—almost always at a lower rate than it would pay the utility.”

At one particular site, that money is being put to good use. The solar systems and efficiency upgrades installed at a public school in Batesville, Arkansas, have “translated directly into higher wages for district teachers.”

The local school board embraced solar after a 2017 energy audit discovered that “the district’s annual utility bills surpassed US$600,000, a steep sum for a school system that for years was strapped for cash—and struggled to retain teachers as a result.”

The audit also found that the district “could save at least $2.4 million over 20 years if it outfitted Batesville High School with more than 1,400 solar panels and updated all of the district’s facilities with new lights, heating and cooling systems, and windows.” In the end, Climatewire says, the solar panels and retrofits slashed the district’s annual energy consumption and “generated enough savings to transform the district’s $250,000 budget deficit into a $1.8-million surplus.”

School Superintendent Michael Hester told Climatewire he knew immediately what he would do with the money: pump up teachers’ salaries, thereby retaining both staff and students. Educators in the district have since seen average salary increases of between $2,000 and $3,000.

“We have the numbers to prove and to show from performance that we’re walking the walk. That’s a slam-dunk for districts around us,” he added.

‘Totally Worth It’, Regulator Says, After Trump Demotes Him for Backing Carbon Pricing, Distributed Energy