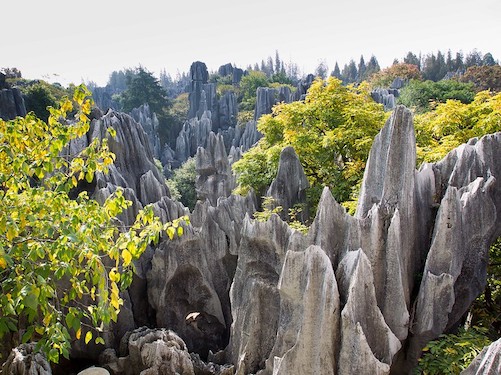 China’s commitment to restoring its forest carbon sinks is paying off, with recent research revealing that the carbon absorption capacity of two swaths of planted territory is far greater than had been estimated.

Published in the journal Nature, the international study sought to calculate just how much CO2 is being taken up by the billions of trees China has planted in recent decades, reports BBC. The researchers drew from a huge and diverse pool of data, including “forestry records, satellite remote-sensing measurements of vegetation greenness, soil water availability, and observations of CO2”—the latter taken both from the ground and from space.

“The two previously under-appreciated carbon sink areas are centred on China’s southwest, in Yunnan, Guizhou, and Guangxi provinces; and its northeast, particularly Heilongjiang and Jilin provinces,” with the southwest portion being “by far the largest single region of uptake” and representing a sink of about -0.35 petagrams annually. One petagram equals one billion tonnes, BBC explains.

The northeast carbon sink, which is seasonal, has a rough net annual balance of -0.05 petagrams.

To put these figures in context, the international team noted that China emitted 2.67 petagrams of carbon from fossil fuel use in 2017.

Co-author Yi Liu of Beijing’s Institute of Atmospheric Physics at the Chinese Academy of Sciences said achieving these targets will require both “a massive change in energy production” and “the growth of sustainable land carbon sinks,” writes BBC.

The encouraging results of the study came from a veritable avalanche of data, said co-author Paul Palmer of Edinburgh University. “Bold scientific statements must be supported by massive amounts of evidence and this is what we have done in this study,” he told BBC. “We have collected together a range of ground-based and satellite data-driven evidence to form a consistent and robust narrative about the Chinese carbon cycle.”

Noting that the new paper “clearly illustrates how multiple sources of evidence from space data can increase our confidence in carbon flux estimates based on sparse ground data,” carbon balance expert Professor Shaun Quegan from Sheffield University said the new research “augurs well for the use of the new generation of space sensors to aid nations’ efforts to meet their commitments under the Paris Agreement.”

BBC adds that Quegan will be the lead on the EU’s upcoming Biomass mission—“a radar spacecraft that will essentially weigh forests from orbit.” The technology will have the capacity to pinpoint exactly where a forest is storing its carbon, “be it in tree trunks, in the soil, or somewhere else.”

But while the China results are promising, they should not be seen as “constituting a ‘free pass’ to reach net zero,”  said Richard Black, director of the UK-based Energy and Climate Intelligence Unit.

“For one thing, carbon absorption will be needed to compensate for ongoing emissions of all greenhouse gases, not just CO2,” he said. “For another, the carbon balance of China’s forests may be compromised by climate change impacts, as we’re seeing now in places such as California, Australia, and Russia.”