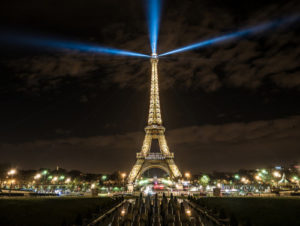 With their promise to bring the United States back into the Paris Agreement on Day One of their new administration, and a US$2-trillion climate plan in their back pockets, a major climate think tank says the election win by President-elect Joe Biden and Vice-President-elect Kamala Harris could be enough to bring a 1.5°C limit on average global warming “within striking distance”.

That possibility is raising hopes for new momentum in the global fight to get greenhouse gas emissions under control. The well wishes from international leaders began minutes after election data-crunchers and major media organizations called the election result late Saturday morning.

“Congratulations, @JoeBiden and @KamalaHarris,” tweeted Prime Minister Justin Trudeau. “Our two countries are close friends, partners, and allies. We share a relationship that’s unique on the world stage. I’m really looking forward to working together and building on that with you both.”

Click here for our Special Report on climate and the U.S. election

The Americans have chosen their President. Congratulations @JoeBiden and @KamalaHarris!” wrote French President Emmanuel Macron. “We have a lot to do to overcome today’s challenges. Let’s work together!”

“London looks forward to working with you—it’s time to get back to building bridges, not walls,” added Mayor Sadiq Khan.

“Congratulations! The American people have made their decision,” German Chancellor Angela Merkel said in a statement. “Our trans-Atlantic friendship is indispensable if we are to deal with the major challenges of our time.”

The politicians’ words of welcome and relief were broader in focus, no doubt covering a raft of (un)diplomatic irritants that will be eased or swept away with Trump’s exit. But Climate Action Tracker’s analysis was specific, showing the new administration’s climate plan shaving 0.1°C off average global warming by the turn of the century. “Coupled with China’s pledge to bring emissions to net-zero before 2060, and the EU, Japan, and South Korea’s commitments to reach net-zero by 2050, a tipping point is being approached that puts the Paris Agreement’s 1.5°C limit within reach,” the consortium said in a release.

“Taken together, the U.S. and China going to net-zero emissions would reduce our estimate of end-of-century warming to 2.3 to 2.4°C, taking the world 25 to 40% of the way towards limiting warming to the Paris Agreement’s 1.5°C limit,” said German climatologist Niklas Höhne of NewClimate Institute, one of the two partner organizations behind the tracker. “What can other countries now do other than follow this overwhelming trend?”

“This could be an historic tipping point: with Biden’s election China, the USA , EU, Japan, South Korea—two-thirds of the world economy and over 50% of global GHG emissions—would have net-zero greenhouse gas emissions by mid-century commitments,” agreed Bill Hare, founder and CEO of Climate Analytics, the other CAT partner. “These commitments are very close, if not within, 1.5°C-consistent pathways for this set of countries, and for the first time ever put the Paris Agreement’s 1.5°C limit within striking distance.”

“It’s a process of systems transformation,” added Nigel Topping, the UK climate champion leading into next year’s United Nations climate conference in Glasgow, in an interview with Bloomberg just before the U.S. vote. “When you’ve got credible pathways, you’ve got the next generation saying ‘you better bloody do it,’ you’ve got scientists saying we have to do it, then businesses and investors start coming onboard and policy-makers start ratcheting up ambition.”

World Resources Institute President and CEO Andrew Steer said the decision to immediately re-enter the 2015 Paris deal “can boost confidence in international cooperation and begin to restore U.S. standing in the world.” In the four years since Donald Trump entered the White House, “U.S. cities, states, and businesses have worked together to make progress on climate change, even without federal leadership. Now, we need an all-hands-on-deck approach with national, state, and local leaders pulling together for a low-carbon economy, powered by equitable and sustainable growth. These leaders should urge Congress to join the national effort.”

Steer urged the Biden-Harris administration to “create an economy for the 21st century, not return to last century’s approach,” knowing that “low-carbon solutions will simultaneously improve health, drive economic growth, and reduce dangerous emissions.” In the first 100 days of the new administration, he added, “Biden can set a new course by expediting the energy transition and by restoring rules and regulations that protect public health and the environment. Biden should work with Congress to take action through economic recovery packages and the budget process that will enhance climate resilience, reduce emissions, and expand clean energy.”

In the earlier months leading up to the election, international climate negotiators were waiting and watching for the results of the U.S. vote, concerned that other countries would hold off on their own accelerated commitments under the Paris Agreement until they saw what was happening with the world’s biggest economy and second-biggest carbon polluter.

“Everyone knew in 2015 it was the expectation—even though we were not able to get a kind of ‘shall’ language in there—that countries would update their original Paris pledges by 2020,” veteran climate negotiator Alden Meyer, then-director of strategy and policy at the Union of Concerned Scientists, told German climate publication Clean Energy Wire in March. “But with the U.S. on the sidelines and unless you have the EU and China leadership, I think it is quite likely people are going to be waiting to see what the U.S. election outcome in November is before deciding where to go on their Paris commitments.”

Then the momentum shifted. The EU adopted its European Green Deal. China committed to peak emissions before 2030 and carbon neutrality by 2060—with its timing driven in part, some analysts speculated, by another shameful Trump tirade at the UN General Assembly. And other major economies following suit. By mid-summer, polls showed a bigger Biden surge than actually materialized and Sen. Kamala Harris (D-CA) was in place as vice-presidential nominee. And concern began to mount that Canada could be left behind, with millions of well-paid jobs in the balance, if it remained one of the few industrialized countries that failed to get with the program.

“If we’re caught flat-footed by a Biden victory, we may watch as entire sectors of our growing clean energy and cleantech sectors pack up and move to greener pastures in the U.S.,” Environmental Defence Executive Director Tim Gray warned in an early August blog post. “Or they may just wither as they fail to secure the government support needed to commercialize innovations.”

In the lead-up to the U.S. vote, jittery countries and commentators still tried to set the stage for any outcome, with Germany calling for “intensifying climate cooperation” regardless of the election result.

“Governments in Germany and elsewhere in Europe are wary of the impact the election could have on international climate action cooperation,” Clean Energy Wire wrote November 3, as U.S. voters went to the polls. But regardless of the outcome, “Minister of Foreign Affairs Heiko Maas said he and Environment Minister Svenja Schulze planned to restart the ‘trans-Atlantic climate bridge’, which would include not only closer cooperation between federal governments, but also between ‘states, cities, Members of Parliament, companies, and science’.”

RenewEconomy took a similar tone last Tuesday. “Whatever the outcome of the election, whether it is a Biden or Trump presidency, Australia will face mounting international pressure to strengthen its own climate targets,” the New South Wales-based publication stated, in an analysis that recounted the considerable diplomatic capital the Scott Morrison government has burned through as it delayed action on climate.

“Australia has a history of hiding under the coat-tails of the world’s biggest economy,” the news story continued. “However, bit by bit, Australia is becoming more exposed to global shifts in attitudes to global warming, as major fossil fuel customers, and Australia’s traditional friends, embrace the need for action.”

But across the board, it was still well understood that a second Trump term would deeply obstruct international climate action and cooperation, while a Biden-Harris administration could unlock those possibilities. This morning, Clean Energy Wire has German politicians breathing a “collective sigh of relief” expressing hope “for a new partnership on combatting climate change”, and tipping the prospect of a trans-Atlantic emissions trading system.

After the election outcome was declared, Thomson-Reuters said the change of management will “affect Africa’s 1.3 billion people on issues ranging from climate change and immigration to women’s health and human rights.”

“Donald Trump’s decision to withhold $2 billion of the $3 billion pledged by his predecessor has contributed to a huge shortfall at the Green Climate Fund—a contribution that would have enabled countries most affected by climate change, such as African countries, to implement policies to strengthen the resilience of their front-line communities,” said Climate Action Network West Africa Coordinator Aissatou Diouf. “We expect the United States would rejoin the Paris Agreement, and step up its efforts and also contribute to the Green Climate Fund.”

“The new U.S. government should prioritize efforts in leading global action to protect millions of people seeking refuge, particularly from those African countries ridden by deadly conflict or the devastation of a changing climate,” added Nigel Tricks, East Africa director with the Norwegian Refugee Council.