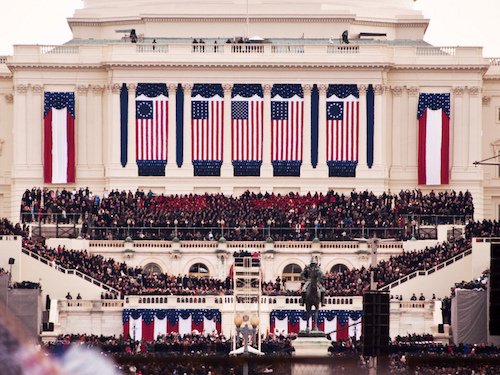 This archived post captures what the world looked like on January 20, 2017, the day a misogynistic, white nationalist climate denier became president of the United States. It stands as a prequel for a monumental, four-year effort to contain the damage on climate, energy, environmental justice, and so much more—and for the rebuilding that begins as soon as the votes (all the votes) have been counted later this week or this month.

This is the day we’ve been waiting for. Though not in the way we usually mean it.

With Donald Trump now sworn in as the 45th president of the United States, it is the day most anyone with an interest in climate change and energy has been anticipating, preparing for, and significantly dreading, ever since we awoke on November 9, 2016 to an unfathomable election result. For some of us, it will be a moment we’ve been training for for most of our lives.

We didn’t ask for this. Most of us (maybe all of us) would have quite happily never seen this day. But here we are at the starting gate.

It’s going to be a long and difficult race.

But never forget this—the odds are still in our favour.

Because for all that a Trump administration threatens chaos and disruption, disappointment and heartbreak for anyone with any connection to this work, the last chapters of the story have not yet been written. Any more than they had been when the polls closed November 8.

Beyond Huffing and Puffing

Trump surely represents a radical change in tone and a drastic reordering of American politics and policy. But his presidency does little to change the basic facts that guide our work—realities that Donald Trump and his cabinet can’t control, however they might huff and puff.

Climate change is still the challenge of our lifetimes, even as climate deniers consolidate their control of the U.S. government.

Renewable energy prices are still plummeting, with electric vehicles and energy storage never far behind. We still hear debates back and forth about how quickly the next generation of energy technology will fully deploy, with the occasional delusional projection looking to fossils to meet 77% of energy demand in 2040. Those arguments will settle themselves before much longer, and if the fossils are really that far behind in their reading and analysis, they’ll be in for a nasty shock.

A “negawatt” generated through energy efficiency is still likely to be more practical and affordable than producing a new unit of energy, renewable or not. And efficiency is as under-appreciated now as it was on November 8.

An ‘Impossible Balancing Act’ for Fossils

The fossil industries still face an impossible balancing act, caught between rising production costs, ever-tougher competition from clean energy, and immutable limits on the atmospheric space available for greenhouse gas emissions, all adding up to the multi-trillion-dollar stranded asset risk that senior analysts like solar entrepreneur Jeremy Leggett and Bank of England Governor Mark Carney have been warning of for many months. Coal miners in the United States are about to learn how little substance there was behind the glibly misleading campaign promise that “Trump Digs Coal”, and some of them are already preparing to jump ship as soon as the promise is well and truly broken.

The community of climate and energy protest movements—the nation Naomi Klein has named Blockadia—is finding its voice and hitting its stride, with First Peoples at the forefront from North Dakota to British Columbia to Quebec. Court action is looking more and more like a potent weapon to defend local communities and the global climate, as U.S. environmental groups bulk up their legal departments and California hires ex-U.S. attorney general Eric Holder to carry the fight. Before long, we’ll likely see legal defence as a key tool in the toolbox to protect U.S. climate science and climate scientists.

In Canada, we still have a mountain of work ahead to give life and substance to a national climate plan that includes a floor price on carbon, has the support of premiers representing 93% of the population, but still drives toward a Harper-era greenhouse gas target that desperately needs to be rethought and toughened up. And we’ll still be contending over pipelines—soon to include Keystone XL v.2—at least until financial backers begin to realize that the low oil and gas prices that make fossil infrastructure a riskier investment are a feature, not a bug.

On the international scene—as U.S. and international colleagues began pointing out [at the UN climate conference] in Marrakech within a few hours of the election result—the climate crisis and the Paris Agreement are both bigger than any one government or head of state. China is already putting some substance behind its statement, within days of Trump’s election win, that it’ll be happy to reap the economic gains and international good will of taking a solo global lead on the post-carbon transition, if that’s really the way the U.S. wants to play it.

As for domestic action in the United States, we’re already seeing cities and states, civil society organizations and 630 businesses and investors stepping up to fill the gap when the Executive Branch of the federal government abandons the field. None of which will feel fundamentally different, given the relentless Congressional obstruction that slowed down presidential action during the Obama years.

And finally, we know that in the U.S. and everywhere else, many of the most durable, effective, saleable climate solutions will be the ones that are developed through local action, dialogue, and advocacy. Particularly when they involve “unusual suspects” who’ve never thought of themselves as part of the energy system, but whose attitudes and behaviours, choices and decisions shape the demand for energy and the emissions that result.

And here’s the silver lining to Trump’s inauguration: the time for anticipation and speculation is over. For 2½ months, there’s been nothing much to do about whatever is ahead, other than rage, grieve, or prepare as best we could for a threat that was not yet fully formed. Now, for better or (more likely) worse, we’ll know what we’re up against and what, if anything, the new administration intends to do right. In response to concrete, fully-formed attacks on climate progress, post-carbon solutions, and the people and communities that depend on them, we’ll be able to mount a response and find pathways to get the work done, the policies implemented, the solutions built.

Already tarnishing the Trump administration is a tragic reality, but one we’ll be able to work with: The people the Trump administration hurts and betrays along the way will know that they’re hurting. Aided by international espionage, domestic fake news, and a deeply flawed electoral college system, Trump eked out a precarious election win by preying on America’s most vulnerable. But the signs of second thoughts are already out there: From the Obamacare opponents who didn’t realize they were voting against their benefits under the Affordable Care Act, to the Rust Belt voter who promised to “turn on him so quick” when Trump fails to deliver coal jobs. From the Tennessee Trump supporter who wants the U.S. Environmental Protection Agency strengthened and expanded, to the polls showing Trump to be the most deeply unpopular president-elect in American history.

The months ahead will be no time for gotchas or told-you-so’s. The recriminations will still flow on Facebook and, sure, it will be tempting to forward and amplify them. We shouldn’t. Because as the backlash to Trump builds, it will be our job to respond with open arms and the job-creating, carbon-busting solutions we know how to deliver.

So I won’t be watching the inauguration today, or reading too much about it tomorrow morning. I’m not a big fan of horror movies. I take no joy from train wrecks. And besides, there’s too much work to do. If I really need to get the odd rhythm of a rambling, senseless, two- or three-hour harangue, I can always look up one of the old newsreels from 1930s Berlin. I only know a small smattering of German, but that shouldn’t really matter: it’s becoming ever more obvious that Trump is best understood in the original Russian.

If you really have time on your hands this afternoon, you may find that the stories in today’s Energy Mix trump the Trump speech. You’ll read about the accelerating decline of coal in China and India. About the serious questions Canadians are beginning to ask about what it would take for the tar sands/oil sands to shut down. About the $500 million the Obama administration is sending to the UN’s Green Climate Fund. About the pitched environment and climate battle that is already under way in response to some of Trump’s most egregious cabinet nominees. And about the U.S. opinion polls showing near-record public concern about climate change and strong, bipartisan support for the EPA.

The Arc of Climate News ‘Really Is This Good’

And something to bear in mind: we didn’t (mostly) pick or prioritize these stories to build a response to the inauguration. Climate and energy news is always a balance between the positive and the scary, but more often than not, the overall arc of the coverage really is this good. In the age of Trump, the work will take on new urgency, we will lose some ground, and the wins will be (even) more complicated. But none of the fundamentals that have driven our success over the last several years (nor those that have threatened humanity’s survival) will disappear. If anything, they’ll be amped up by sheer urgency.

There’s a quote from the playwright and former Czech president, Václav Havel, that I’ve carried with me in my wallet for the last couple of decades. Just this morning, looking for the online reference, I found the longer essay of which it is a part—and, really, it’s a must-read (and one more great alternative to the inauguration coverage). After thinking deeply and writing beautifully about hopelessness and absurdity, about history and its dehumanization, Havel writes:

“Hope is definitely not the same thing as optimism. It’s not the conviction that something will turn out well, but the certainty that something makes sense, regardless of how it turns out. It is this hope, above all, that gives us strength to live and to continually try new things, even in conditions that seem as hopeless as ours do, here and now. In the face of this absurdity, life is too precious a thing to permit its devaluation by living pointlessly, emptily, without meaning, without love, and, finally, without hope.”

So here we are at the starting gate. Let’s get on with it.