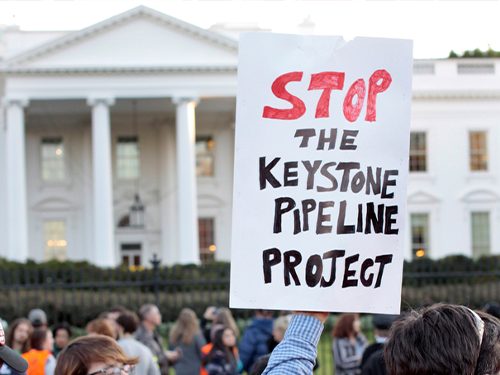 The Keystone XL pipeline may be coming to the end of a very long road, ultimately brought down by the combination of a Joe Biden presidency and crashing global oil demand—even if Prime Minister Justin Trudeau and Natural Resources Minister Seamus O’Regan are still standing beside Alberta Premier Jason Kenney to support the controversial project.

“The end of Keystone XL would bring down the curtain on a 12-year drama that has come to symbolize the clash between environmentalists and the oil industry,” BNN Bloomberg reports. Biden has pledged to rescind a key presidential permit for the project, and “the politics are shifting at a moment when demand for oil is weak and other pipelines are moving toward completion more quickly,” the news agency adds.

“The question should be, is Keystone XL necessary?” said Eric Nuttall, Toronto-based partner and senior portfolio manager at Ninepoint Partners LP. “The answer to that is quite clearly no.”

Bloomberg points to the Trans Mountain pipeline expansion and Enbridge’s Line 3 pipeline in the Midwestern U.S. as two pipelines that face fewer legal and regulatory hurdles than Keystone (just as Trans Mountain opponents are citing Keystone as one of a list of projects that will soak up any demand for pipeline capacity if TMX is cancelled). The projects “are being built as Alberta oil sands producers, reeling from the pandemic, have been cutting capital budgets and focusing on cash flow over growth,” Bloomberg says. And “for now, they may be more than enough to alleviate pipeline shortages that existed before the pandemic.”

There’s also a “question mark” over any belief that Canada will ever again ramp up its tar sands/oil sands production, the news agency adds, with prices hovering around US$30 per barrel and fossils showing little interest in expansion. Nuttall pointed to a “new ethos of no growth”, adding that the industry’s focus on investor dividends and cash flow “really moderates the go-forward production outlook”.

The flagging momentum behind Keystone will be a problem for Jason Kenney, after his cash-strapped government handed the project C$8 billion in scarce taxpayers’ dollars last spring as a sweetener to get construction started. Bloomberg breaks the total down (after converting it to U.S. dollars) as $1.1 billion in investment and another $4.2 billion in loan guarantees—which would presumably come into play if the project folded.

But the pipeline’s rapidly-declining prospects didn’t stop Trudeau and O’Regan from affirming their support for the project after a call with Kenney last Thursday night. “We’ll work together on KXL and we’ll work together on reducing emissions,” O’Regan tweeted. “We’ll need all the ingenuity, determination, and hard work of Alberta’s energy workers to do both.”

Meanwhile, Reuters notes that Biden will have to work hard if he wants to replace fossil industry employment with jobs that offer similar pay scales in solar and wind.

“Union representation, pay, and benefits in the fast-growing wind and solar power industries at the centre of a clean energy transition lag those in oil, gas, and coal,” the news agency writes, citing data from the U.S. Bureau of Labor Statistics, academic studies, and expert interviews. “Solar and wind energy installations, once built, also tend to require fewer workers to run than oil and gas infrastructure. And both industries rely heavily on imported components to keep costs down, potentially limiting their U.S. job creation.”

Rewilded farmland can save money − and the Earth