Unstable Hillsides, Homes ‘Ripping in Half’ Emerge as Legacy of Fort Mac Wildfire 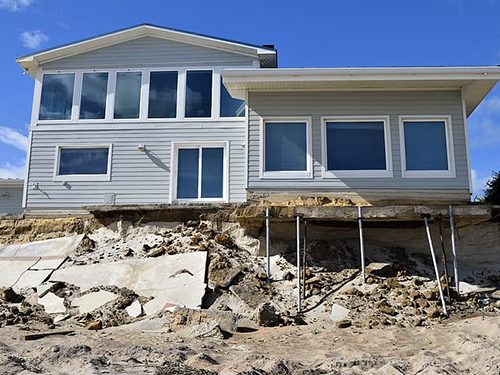 Fort McMurray’s devastating Horse River wildfire of 2016—known locally as The Beast—continues to haunt the town’s residents, with the resulting land instability now literally tearing some homes in half.

Susan Smith and her husband are among the nine homeowners in the Draper neighbourhood who are desperate to sell their disintegrating homes, reports CBC. But real estate agents won’t even list them. Adding to their distress: the sense that the Regional Municipality of Wood Buffalo isn’t all that interested in finding a solution.

The Smiths bought their home for $775,000 in 2009 and spent $300,000 upgrading the property. The building may have survived the 2016 fire, but in 2017 things began to (literally) fall apart when the hill on which their property sits began to slide. Now, “the garage is ripping in half, the skirting on the house is buckling, and the doors and windows on the back of the house won’t open,” reports CBC.

Since the land began shifting, the couple has invested about $100,000 “to repair damage and stop the hill from sliding further,” the national broadcaster adds. Even so, “the retaining wall has moved and nothing they do seems to make a difference.” While municipal engineers have been out to look at a nearby affected property, no action has thus far been taken, leaving the Smiths feeling frustrated and without recourse.

“I hate it,” Susan Smith told CBC. “I love the community and the people in the community, but this property? I hate it.”

It’s not just the Smiths and their neighbours who are feeling the after-effects of the ravaging Fort McMurray fire. A 2018 report published in the International Journal of Mental Health and Addiction described a city being worn down by depression and substance abuse, and a 2019 University of Alberta study found that nearly 40% of local high school students showed signs of post-traumatic stress disorder 18 months after their evacuation from the flames. With such stress and sorrow as a backdrop, the residents of Fort McMurray may feel further abandoned by municipal officials striving to rebuild too quickly and too cheaply in the wake of the fire.

Approached by CBC about the sliding homes in Draper, local councillor Sheila Lalonde responded that she is aware of the issue, and that it is “high on her priority list.”