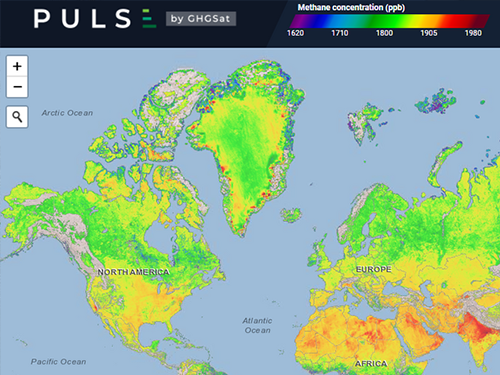 A Montreal company has released a new interactive map of global methane concentrations in the hope that it will inspire questions and provoke discussion.

Titled “Pulse” and developed by GHGSat, a Canadian emissions monitoring service, the free-to-use map uses satellite data to track emissions “at a resolution of approximately two kilometres by two kilometres,” with a for-pay version reaching a record-high resolution of 25 metres, reports the Canadian Press. The data reveal that “methane emissions have risen by nearly 10% over the past two decades—mainly from agriculture and the natural gas industry.” Currently, methane accounts for roughly 25% of all anthropogenic greenhouse gas emissions.

Speaking at the launch of the map, GHGSat founder and president Stephane Germain noted that some 40% of methane emissions are due to natural causes, leaving human beings responsible for the rest.

That’s not a good thing, said Sarah Gallagher, scientific adviser for the Canadian Space Agency. “The global warming potential of methane is 84 times greater than that of carbon dioxide—the greenhouse gas we may be most familiar with,” she told CP.

The new Pulse map is revealing apparent fluctuations of methane in Canada’s Arctic regions, as well. Pointing out that there is not a lot of industrial activity in the region, Gallagher affirmed that methane had to be coming from natural sources, warning that the source in this case could be melting permafrost.

“It is important to know where, when, and how methane enters the atmosphere,” she noted. “Reducing methane emissions is an important tool in the fight against climate change.”