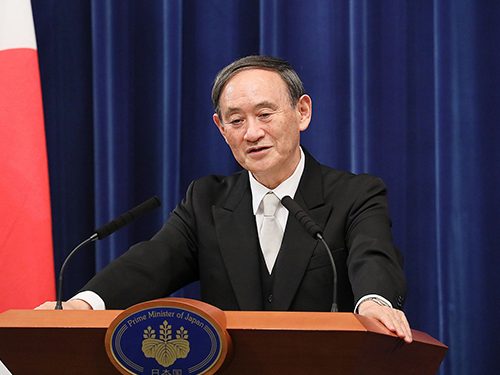 “High-efficiency” coal plants, carbon capture and storage, and nuclear generation are cornerstones of the highly-touted plan for carbon neutrality by 2050 that Japanese Prime Minister Yoshihide Suga announced earlier today in his first major speech to the national parliament, the Diet, since taking office last month.

For several days, the impending announcement had triggered a good deal of optimism, amid signals that Japan was about to significantly strengthen its commitments to climate action. “The new target, set to be unveiled in a speech to lawmakers…by Prime Minister Yoshihide Suga, means Japan will finally catch up to the European Union, which set the same goal last year,” Nikkei Asia reported late last week. “Companies in industries like electric power, automobiles, and steel will be expected to take strict measures to meet the international promise.”

As it turned out, early reports on the statement had Suga pledging to “reduce greenhouse gas emissions in Japan to net zero by 2050, that is, carbon neutral by 2050, and aim to achieve a decarbonized society,” and to “fundamentally shift our long-standing policy on coal-fired power generation.” But the details appear to fall short of any definition of “fundamental”.

“In order for today’s 2050 Carbon Neutral Declaration to really strengthen Japan’s climate actions, it is necessary to significantly strengthen the GHG reduction target for 2030, and to completely phase out coal-fired power generation, including those which have been called ‘high efficiency’,” said Teruyuki Ohno, Executive Director of the Tokyo-based Renewable Energy Institute. “The key to policy shift is to supply 45% of electricity from renewable energy by 2030.”

While the decision to set a long-term target is a step in the right direction, Japan must increase its 2030 target from a 26% to a 45% emission reduction from 2010 levels, completely phase out coal, and turn to renewables to decarbonize heating and fuel, as well as electricity, the Institute added. “While advocating carbon neutrality in 2050, if the emission reduction target for 2030 is only slightly revised, the announcement today will not be acclaimed by the international community.”

“Overall, this is a welcome development from the world’s fifth-largest emitter,” opined the Climate Action Tracker. “This clear commitment to net-zero greenhouse gas emissions is possibly triggered by China’s 2060 carbon neutrality target announcement, the rise in Japan of environmental, social, and governance (ESG) investment and the increasing sense of urgency on climate risks in the business sector, and the government’s recent realization that coal is no longer an economic option.”

Also notable, the Tracker adds, “is that the Japanese government has always argued that climate policy was too expensive, but now PM Suga is talking about growth.”

But “what is most important is that Japan implements the measures necessary to actually achieve a transition towards 2050 net-zero. To enable this, a major revision of the current ‘highly insufficient‘ 2030 target (the nationally determined contribution, or NDC) is imperative.” That means the country “needs to go further on coal than the announcement it made in July—that it will phase out old and inefficient coal-fired power plants to meet its 2030 target,” while moving to decarbonize “hard-to-abate” sectors like steel and buildings while embracing and encouraging climate action by cities, regions, and businesses.

News reports leading into the announcement seemed to bake in the assumption that a considerably more ambitious announcement was on the way.

Japan had previously committed to reduce emissions 80% by 2050 and hit 100% as early as possible in the second half of the century, Nikkei said, but “the lack of a clear timeline has been criticized for being vague and reluctant to deal with environmental problems.” Japan’s previous plan called for an electricity supply in 2030 that consists of 20 to 22% nuclear, 22 to 24% renewables, and 56% coal and liquefied natural gas (LNG).

“Last year’s climate strategy heavily relied on technological solutions to curb emissions and provided little detail on addressing Japan’s coal dependency, with the government committing to use carbon capture and storage in coal-fired power generation by 2030,” Climate Home News reported. But “after president Xi Jinping’s surprise announcement last month that China will aim for carbon neutrality by 2060 and South Korea’s similar plans earlier this year, Japan was under pressure to clarify its long-term ambition.”

At the same time, “a flurry of commitments from Asian investors and development banks to strengthen their climate plans and end coal financing added to the momentum behind a 2050 net-zero target, which in recent years has become the benchmark for climate ambition.”

Ahead of the announcement, Kimiko Hirata, international director of Japan’s Kiko Network, called the announcement a “significant step forward” that “could create a step change in domestic policy decisions and among businesses and financial institutions.”

“This is very important and great news,” Takeshi Kuramochi, climate policy researcher at NewClimate Institute, told Climate Home. “The coal phaseout certainly needs to happen much earlier than what the government has been discussing.”