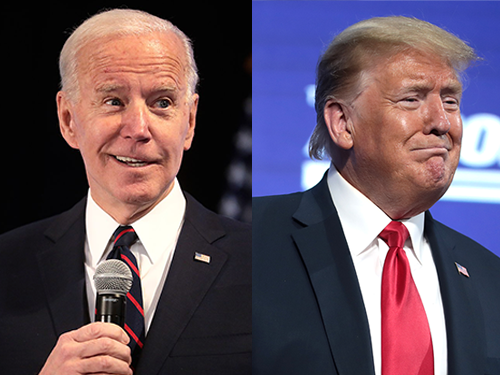 A wave of alarmed and hopeful commentary has been building since the U.S. presidential debate last Thursday evening, when Democratic candidate Joe Biden acknowledged that his country will have make the transition off oil.

“In the nearly 12-minute discussion, the Democratic standard-bearer pledged to move the United States away from oil in favour of renewable energy and predicted the strategy would generate millions of jobs,” the Washington Post reports. Donald Trump, by contrast, “said Biden’s plan would be costly and hurt the economy, particularly in oil-producing states where the two men are competing for votes.”

Trump: “Would you close down the oil industry?”

Biden: “Yes. I would transition.”

Trump: “That is a big statement.”

Biden: “That is a big statement.”

Trump: “Why would you do that?”

Biden: “He takes everything out of context. But the point is, we have to move toward a net-zero emissions. The first place to do that by the year 2035 is in energy production. By 2050: Totally.”

The Post adds that “Biden’s ‘yes’ answer to closing down the oil industry was potentially serious enough for him to try to clarify his remarks to reporters later at the airport. He said he would stop giving money to the oil industry, rather than close it down entirely: ‘We’re not going to get rid of fossil fuels. We’re going to get rid of subsidies for fossil fuels’.”

In the immediate aftermath of the exchange, some analysts wondered how politically damaging Biden’s commitment would be in the three oil-dependent states that Trump name-checked—particularly Pennsylvania, which holds 20 electoral college votes and is widely seen as a tipping-point state in next Tuesday’s vote. But much of the reporting over the last few days has focused on the climate-focused, often younger voters who will be pleased by Biden’s statement, and the factors that may be driving opposition to oil and gas production through horizontal fracturing (fracking) in communities where Republicans would expect to find support.

On one hand, writes Post analyst Amber Phillips, Biden may have handed Trump an attack line for the closing days of the campaign. “Biden initially answered in the affirmative when asked if he would close the oil industry, even if he tried to clarify it later and stress that none of his changes would happen right away.”

But at the same time, she adds, the statement “may not be the gold nugget Trump is looking for,” with two-thirds of Americans telling pollsters that Trump hasn’t done enough about the climate crisis, and half saying urgent action is needed in the next decade—all of which is consistent with Biden’s policy pronouncements.

Get the rest of the Post’s post-debate analysis here and here. The New York Times is out with a field guide to the election and climate change here.

The Associated Press goes through the same political calculus. “Pennsylvania is both a leading battleground state in the presidential election and a leader in the nation’s fracking boom,” and “Trump touts his support for a sector he says brings economic benefits to rural areas and jobs to construction workers. The state says the oil and gas sector employs about 26,000 workers there,” the news agency writes.

“But it’s not clear yet how that pitch is landing, even in Pennsylvania. In the suburbs that might be key to a Trump path to victory, Pennsylvania voters have shown opposition to the drilling and the massive pipelines required to move its product across the state. National polling shows growing skepticism of fracking.”

Earlier this month, The Guardian cited the multi-billion-dollar Mariner East pipeline project as an example of the fossil infrastructure that has driven opposition to fracking in Pennsylvania. The project “has caused major disruption to dozens of suburban and rural communities, contaminated surface and groundwater sources in hundreds of mud spills, and created countless sinkholes in parks, roads, and yards since construction began in early 2017,” the UK-based paper states. “At least 105,000 people live within a half-mile blast radius of the ME pipeline system, which carries highly flammable, odourless, and colourless gases in liquified form; many more Pennsylvanians attend schools, libraries, and workplaces in close proximity.”

“The direct impact in our township has opened our eyes to how elected officials and government agencies we expect to protect us don’t,” said campaigner Ginny Kerslake. “Without fracking, there are no pipelines, and vice versa.”

This morning, analysts on electoral-vote.com have their own take on whether Biden’s remarks were a gaffe or a deliberately-targeted message. “Were the oil workers who might be affected planning to vote for Biden to start with?” they ask. “Will they now switch horses? Remember, most blue-collar white men in the Midwest were already planning to vote for Trump. This new tidbit of information isn’t going to change anything.”

More significantly, “how will this affect those much-fought-over ‘suburban housewives'”, a group of swing voters who’ve been a focus throughout the campaign for both parties? “Our guess is that many of them are concerned about the environment for the sake of their children and may applaud Biden for what he said rather than condemning him.” And “what about progressive young Democrats who worship Rep. Alexandria Ocasio-Cortez (D-NY) and love her Green New Deal and weren’t planning to vote at all? Hearing Biden suggest we will one day get rid of oil is certainly not a deal-breaker for them. In fact, it might motivate some of them to actually vote for him.”

All in all, “the bottom line is we are not yet convinced that Biden really hurt himself in Pennsylvania, where there is a lot of fracking. Texas is more dependent on oil than Pennsylvania,” but his campaign “doesn’t need Texas, wasn’t trying to win it, and probably is not going to get it, with or without the oil comment.”

In the course of his exchange with Trump, Biden stressed that he “never said I opposed fracking,” only that he would ban new fracking on federal land. “That’s a big distinction,” Mother Jones notes, since “roughly 90% of fracking occurs on state and private land, meaning he’d be leaving the vast amount of existing fracking alone.”

And a former top climate attorney at the U.S. Environmental Protection Agency told MoJo the incoming president couldn’t ban fracking without an act of Congress, even if he wanted to.

But “what a president can do is enforce regulations within the EPA and [Bureau of Land Management]’s power,” writes reporter Rebecca Leber. “Biden can reinstate regulations that Trump has weakened or thrown out, like limiting methane emissions from oil and gas operations, controlling for the water pollution from fracking, requiring public disclosure of the chemicals used, and inspecting wells and storage for leaks.”

Bloomberg First Word columnist Julian Lee predicts that Biden would also likely ban new oil and gas permits on public lands and waters, permanently protect the Arctic National Wildlife Refuge and other environmentally sensitive areas, and modify royalties charged to fossil companies to account for their climate impacts—a move that wouldn’t directly stop production, but would cut into cash flow for an industry that is already hurting in a world of COVID-19 and plummeting consumer demand.

And there’s another factor—Bloomberg says Biden’s US$2-trillion climate plan, with its emphasis on a decarbonized grid, “would choke gas,” even without an outright fracking ban. “In the long run, the fuel may prove economically and environmentally untenable within the power sector, a key market for producers. Biden’s climate plan would only accelerate that outcome, with massive investments in wind, solar, and battery storage giving those energy sources a leg up. And his goal of a carbon-neutral grid would severely curb, if not destroy, gas’s share of the pie in favor of cheaper, cleaner renewables.”

“Decarbonization isn’t a debate—it’s a fossil fuel death sentence,” ClearView Energy Partners Managing Director Kevin Book told the news agency. “It means a resource is going off the grid. That is the inevitable implication.”

Greentech Media has a look at the climate and energy policies that could emerge in the first 100 days of a Biden presidency, while InsideClimate News sees a realistic possibility that an Indigenous woman will be appointed Interior Secretary in a Biden cabinet. Reuters reports that solar energy stocks gained value Friday on the strength of Biden’s comments.

The electoral fix: On the night of the debate, instant polls by CNN and Data for Progress found that Biden won the engagement by margins of 53 to 39% and 52 to 41%, respectively. On the latest electoral-vote.com map Sunday morning, Biden led Trump by 378 electoral votes to 160, and by 279 to 126 in states where polling numbers were beyond the margin for error. In the United States’ famously complicated electoral system, each state is assigned a given number of electoral votes, the votes are almost always awarded state-wide on a first-past-the-post basis, and candidates need 270 electoral votes to win.