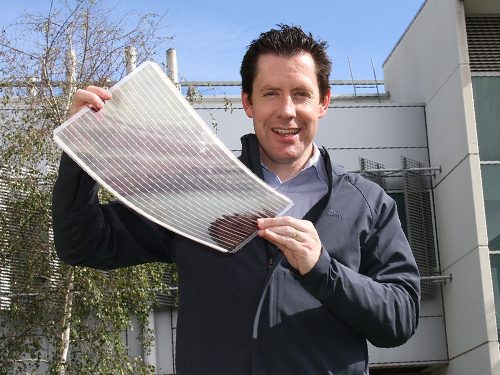 Swiss researchers are getting excited about a polymer that could allow them to incorporate a “flexible solar concentrator” in textile fibres, making it possible to charge personal electronic devices from the clothes their owners wear.

The successful project by scientists at Empa and ETH Zurich “opens up numerous possibilities for producing energy directly where it is needed,” Phys.org reports.

Despite the constant hunt for power supplies to plug in smart phones, tablets, and laptops, “power sockets (at least for this purpose) could possibly become obsolete,” the news story states. “By means of a new polymer that is applied on textile fibres, [our] jackets, T-shirts, and the like could soon function as solar collectors, and thus as a mobile energy supply.”

The solar industry already uses luminescent solar concentrators (LSC) for other purposes. “The luminescent materials in the LSC capture diffuse ambient light and transmit its energy to the actual solar cell, which then converts light into electrical energy,” the Swiss Federal Laboratories for Materials Science and Technology explains, in its post for Phys.org. “However, LSCs are currently only available as rigid components, and are unsuitable for use in textiles because they are neither flexible nor permeable to air and water vapour.”

So an interdisciplinary team led by Luciano Boesel of the Laboratory for Biomimetic Membranes and Textiles developed a new material based on Amphiphilic Polymer Co-Networks (APCN), a known polymer that is already used in some types of contact lenses. He said the team chose this particular material because it allowed them to use two separate, luminescent nano-materials and have them interact without combining.

“Just as on large-scale (rigid) collectors, the luminescent materials capture a much wider spectrum of light than is possible with conventional photovoltaics,” Phys.org writes. “The novel solar concentrators can be applied to textile fibres without the textile becoming brittle and susceptible to cracking or accumulating water vapour in the form of sweat.”