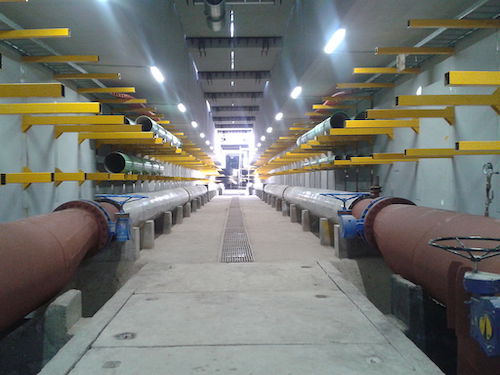 Germany’s network of city utilities (stadtwerke) has moved to the forefront of the clean energy revolution, according to an urban planner based in Berlin, helping to drive the country’s transition off fossil fuels and often moving into an array of local services beyond energy.

Unlike their North American kin, many of the the stadtwerke found throughout Germany provide much more than electricity and gas, writes Nikhil Nadkarni in an essay for Medium. The companies also provide “drinking water, wastewater treatment, waste disposal, city cleaning, telecommunications, and broadband.” Some even operate local transit, ice rinks, fibre-optic networks, city pools, and bowling alleys. And some of them are finding extremely high levels of public support as they move into developing local sources of renewable energy supply.

And lest readers think that pervasive web of responsibility gives them a hammerlock on power bills, Nadkarni points to benefits that have evolved out of the liberalization of German electricity and gas markets, driven by European Union policy in the late 1990s. “The local distribution of electricity and gas was uncoupled from the supply of the energy, and the latter was able to be freely traded on an open market,” a transformation that left the local stadtwerke as the primary grid and gas network operators, has but led to a vast expansion in possible providers. That shift gave customers the ability to “choose the electricity supply rate that makes sense for them, based on price, environmental, or other goals.”

While some stadtwerke have fallen to the forces of privatization—district heating and electricity supply in Berlin, for example, belongs to Swedish energy conglomerate Vattenfall—many have survived. The list includes the 100% community-owned Verband Kommunale Unternehmen (VKU), “an organization of 1,450 utilities focused on local self-governance and creating ‘a basis for self-determined, sustainable living and working.’”

By “sustainable,” Nadkarni means a commitment to serious community-based climate action, including building renewable energy systems “at a scale that aims to match what their towns use.” Citing the example of a community utility in Schwäbisch Hall, Nadkarni describes how a purpose-built network of biomass, wind, hydropower, and solar now provides 70% of the city’s electricity use, with the remaining 30% coming from a wind farm operated by a neighbouring stadtwerke.

Germany’s community utilities are also leading the way on “wärmewende” (heating transformation), driven in part by innovations in the shared district energy system sector. “Especially visionary,” writes Nadkarni, is the project undertaken by Stadtwerk Haßfurt, which “partnered with Greenpeace Germany to build a 1.25-MW electrolyzer that produces clean, renewable hydrogen using electricity from the utility’s wind farm at Sailerhäuser Wald.” The hydrogen “is then used in the utility’s central plant to produce power and heat when needed,” he adds.

The utilities are also tackling the serious environmental footprint of summertime cooling, with Stadtwerke Munich “building a new 14-kilometre cooling network and two cooling plants to provide chilled water to buildings for use in air conditioning systems, replacing individual building systems.” The system “uses nine underground ice storage units to provide a thermal battery of coldness—helping store up excess cold capacity for use when demand is high,” explains Nadkarni. Runoff from the subway’s drainage system helps cool other parts of the city.

Yet another benefit of the stadtwerke: Far less pushback against energy projects. Citing a study by Agora Energiewende, Nadkarni reports that “an incredible 88% of previous participants in a community-owned energy project would sign up for one again,” a statistic that confirms “local value-add” as an imperative in the “new normal” of renewable energy.

With the success of the stadtwerke so apparent, “there is a new push to retake local control of energy distribution”, a process known as “remunicipalization” that is often driven by climate goals. Since 2005, approximately 250 services have been remunicipalized, “with another 156 utility services being served by new, first-time municipal undertakings,” notes Nadkarni.