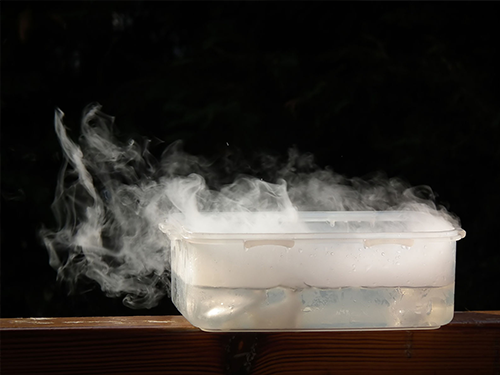 A fundamental law of physics coupled with 21st-century nanotechnology has yielded a product that could significantly reduce the emissions generated by the world’s 3.5 billion-plus air conditioners and refrigerators—at low cost.

Combining material science and nanotechnology with ancient knowledge, a University of California at Los Angeles materials scientist has harnessed the principle of radiative cooling in a “thin, mirror-like film engineered to maximize radiative cooling on a molecular level,” reports the Washington Post.

To create his material, Aaswath Raman drew on knowledge desert dwellers in Asia and North Africa first acquired centuries ago, when they discovered that exposing water to the chill, arid night air could produce ice, “even though the air temperature never dropped below freezing.”

The process “wasn’t magic; it was science,” writes the Post. “All objects—people, plants, buildings, planets—give off heat in waves of invisible light. On a clear, starry night, that radiation can rise through the atmosphere until it escapes Earth entirely.”

Raman’s film uses the same principle, sending heat from the objects it covers out into space “while absorbing almost no radiation.” Already capable of cooling things like conduit pipes, it may one day replace air conditioning entirely. “And it requires no electricity, no special fuel—just a clear day and a view of the sky,” the Post notes.

Currently, the hydrofluorocarbons used as coolants in air conditioners and fridges and the fossil fuels used to power them contribute roughly 7% of global emissions. And “by 2050, when the demand for air conditioning is expected to triple, cooling could become one of world’s top sources of planet-warming gases.”

While the almost perfectly reflective surface of the film is key to ensuring that it absorbs no energy, even in full sunlight, it was Raman’s tapping into a “loophole in the greenhouse effect” that enabled his creation to maximize the heat it could radiate back into space, explains the Post.

Working with colleagues at Stanford University’s engineering department, Raman used nanotechnology to create a film of many microscopic layers whose variable thickness and composition “were designed to interfere with the way different wavelengths of light travel.” While incoming solar radiation is bounced back into space, heat generated by the object itself bounces between the layers, “like a pinball in a machine,” allowing only the infrared layers to escape outward.

It took a trip back to see his grandmother in Mumbai for Raman to recognize the true worth of his discovery, however. Noticing how many more homes had air conditioners in their windows than when he was a child, he realized the trend would have a toll on the global climate, even as it was “an unqualified victory for people’s health” in a world facing extreme heat. These multiple epiphanies gave Raman “more parameters for his cooling material,” writes the Post.

“It had to be cheap, so it would be accessible to people of all income levels. It had to be able to integrate into existing air-conditioning systems.”

The panels he eventually created—now patented under the name SkyCool—can indeed be integrated into existing air-conditioners: “Water running through the panels is chilled by the film, then transported into the air conditioning system, where it lowers the temperature of the refrigerant. This reduces the amount of electricity needed to turn hot air into cold.”

While the SkyCool technology needs refining and is still too expensive for widespread deployment, those questions are all business-related: The science, reports the Post, is in place.

Meanwhile, Raman and his colleagues continue to expand the range of applications for the film’s radiative cooling powers, including recent research into “the possibility of modifying off-the-shelf paints to enhance radiative cooling.” If that works, “building owners could simply paint their roofs to make the structures significantly cooler,” writes the Post.