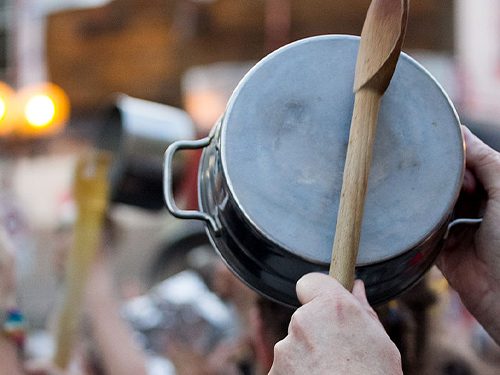 As the United States election campaign enters its final weeks, youth climate activists are out in force, “naming and shaming” politicians who are ignoring the climate emergency.

Taking a literal approach to getting elected leaders to “wake up,” the young activists have been showing up at night to bang pots and pans outside the homes of people like Senator Pat Toomey (R-PA), “a former Wall Street banker who has repeatedly voted against climate action measures,” reports The Guardian. The strategy was borrowed from a group of young Civil War abolitionists called the Wide Awakes.

Among the activists engaging such simple but effective tactics is Abby DiNardo, a 17-year-old high schooler who spoke to The Guardian about the empowerment she felt as she coordinated the Toomey wake-up call: “Even though we can’t vote, we can show up on the streets and wake up politicians. It’s our future on the line, not theirs.”

Expressing similar sentiments were a group of Sunrise Movement members, all of them middle school activists who gathered in Philadelphia outside Joe Biden’s virtual town hall last week to demand bolder climate action from the Democratic candidate.

In its coverage of that protest, Grist writes that the students “weren’t protesting against Biden, per se—in fact, they were imploring people to vote for him.” To eighth grader Eva McIver-Jenkins, the candidate is the far lesser of two evils.

“Joe Biden may not be the perfect candidate, but he has expressed his agenda to fight climate change,” she said. “And although it may not be much, it is a greater deal than what Trump can ever dream of. Biden is the best chance we have to end this climate crisis.”

But, like many of her peers, McIver-Jenkins wants Biden to commit to something like the Green New Deal, in particular its goal “to eliminate all non-renewable energy by 2030,” adds Grist. Calling out Biden for his reluctance to commit to that timeline, which he has described as “impossible,” McIver-Jenkins said that “while any climate plan is a victory right now, his is timid and not the ambitious fight we need to wage in the next decade before what we are doing to this planet becomes irreversible.”

But despite such frustrations, U.S. climate activists of voting age will likely support Biden. Citing a Harvard Institute of Politics poll conducted in September, Grist says Biden currently “holds a 33-point lead over Trump among 18- to 29-year-olds who plan to vote.” [Although Democrats are fretting about the proportion of voters in that age group who will actually make it out to the polls—Ed.]

Troy Turner, Sunrise’s electoral coordinator for Pennsylvania, is a living reflection of that poll. The 29-year-old told The Guardian that while Biden is “super unappealing” and “represents the old guard of politics favouring style over substance,” there isn’t a lot of choice for voters like him.

“Young people are policy voters, but we have to vote for Biden as he represents potential for a livable future,” he said. “Trump represents the apocalypse.”