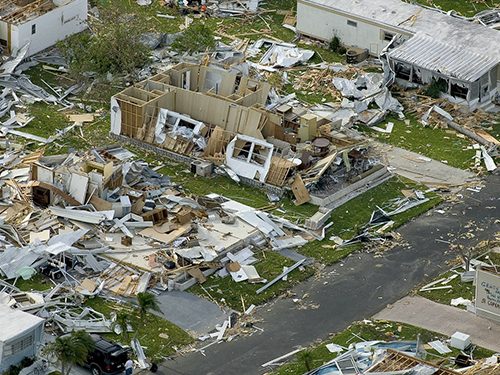 2020 has already tied the U.S. record for the largest number of climate disasters that produced at least US$1 billion in damage. And the year still has nearly three months to go.

The 16 mega-disasters so far this year tie the record set in 2011 and 2017, Bloomberg Green reports, citing the U.S. National Oceanic and Atmospheric Administration (NOAA). “The annual average for 2015 to 2019 was 13.8 billion-dollar events a year, more than double the average since 1980,” Bloomberg notes.

The news lands less than a month before the country has an opportunity to move a renowned climate change denier out of the White House, and to shift the majority in the U.S. Senate to enable more decisive action on the climate crisis..

NOAA released its statement last week while Hurricane Delta, the season’s 25th named storm, was inundating Mexico’s Yucatan Peninsula—and before it came ashore in Louisiana, following in the path of Hurricane Laura just six weeks earlier. Bloomberg explains why the storm was expected to intensify as it passed over the warm waters of the Gulf of Mexico. “Higher water temperatures provide fuel to hurricanes, so while Delta lost energy after making landfall in Mexico, it’s predicted to become a major storm again en route to the northern coast,” the news agency writes.

“Faster intensification, as just happened with Hurricane Delta, is one of the ways climate change is loading the hurricane dice against us,” climate scientist Katharine Hayhoe tweeted days later. “On average, Atlantic hurricanes are intensifying from a storm to Cat 3 now 20 hours faster than 25 years ago.”

“Also this week, an amalgamation of fires that started burning in California in August became the first recorded ‘gigafire’, covering more than a million of the four million-plus acres in the state that have burned so far this year,” Bloomberg adds.

Both categories of big disasters “overshadowed slower-moving events that in a lesser year might have drawn more attention than they have,” the news agency says. “By the end of September, about 43% of the continental U.S. faced drought, particularly the northeast and west. It’s the largest area in drought since September 2013, when the west faced a years-long dry spell. Alaska’s Kodiak Island and Hawaii are also in drought,” while “a September freeze in the Northern Plains stranded crops a month sooner than usual.”