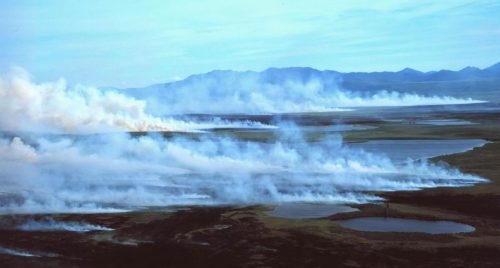 High above the Arctic Circle, fires that flared a year ago continued to smoulder under the snow through the winter to flare up again − two months earlier than usual, and on a scale not seen before.

And if the notion of fire and ice seems a surprise, prepare for the idea of a blazing rainforest. In a second and separate study, researchers exploring the climate lessons from the deep past 90 million years ago have found that, if the atmosphere is rich enough in oxygen, then even the wettest foliage can ignite and burn, to consume perhaps up to 40% of the world’s forest.

Scientists from the US report in Nature Geoscience that they have identified an unexpected threat from “zombie fires” which, despite heavy snowmelt, they say “can smoulder in carbon-rich peat below the surface for months or years, often only detectable through smoke released at the surface, and can even occur through cold winter months.”

“The climate change we are causing now, it’s not something where if we don’t fix it, only our grandkids will have to deal with it. The impacts are really long-lasting”

They warn that in the fast-changing climate of the highest northern latitudes, the evidence from last year and this suggest that extreme temperatures and drier conditions mean there is a lot more surface fuel in the Arctic to catch fire and melt the Arctic snows.

Dwarf shrubs, sedges, mosses and grasses are invading the tundra, to join the surface peat, and even the bogs, fens and marches of the tundra are now burning. In all, 50% of the detected fires above 65°North − many in the Russian Arctic − happened on permafrost: that is, on ever-icy soils.

“It’s not just the amount of burned area that is alarming,” said Merritt Turetsky of the University of Colorado at Boulder, and one of the authors. “There are other trends we noticed in the satellite data that tell us how the Arctic fire regime is changing and what this spells for our climate future.”

Wildfires are on the increase now, in a world in which climate change has delivered hotter and drier conditions for many regions. Unexpectedly, according to a second study in Nature Geoscience, fossilized evidence in rocks in Utah has delivered evidence of massive and sustained forest fires, in the form of polycyclic aromatic hydrocarbons preserved in black shales laid down in the Cretaceous.

Researchers pieced together a story of dramatic climate change 94 million years ago, when carbon dioxide built up in the atmosphere, and land and sea plants began to absorb it from the atmosphere on a massive scale. Microbial respiration stepped up too, and parts of the ocean became increasingly low in oxygen.

During 100,000 years of this, so much carbon had been buried in the ground or the oceans that – with the release of molecular oxygen, the O2 in CO2 − atmospheric oxygen levels began to increase. And with that, the scientists say, so did the probability of forest fires, even in wet forest ecosystems. Altogether, perhaps 30% to 40% of the planet’s forests were consumed by fire over 100 millennia.

“One of the consequences of having more oxygen in the atmosphere is that it’s easier to burn fires. It’s the same reason you blow on embers to stoke a fire,” said Garrett Boudinot, then at the University of Boulder Colorado and now with the Colorado Wildlife Council, who led the research.

“This finding highlights the prolonged impacts of climate change. The climate change we are causing now, it’s not something where if we don’t fix it, only our grandkids will have to deal with it. The history of climate change in Earth history tells us that the impacts are really long-lasting.” − Climate News Network