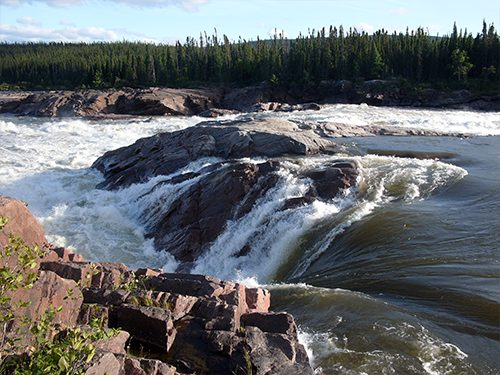 The Innu Nation of Labrador has filed a C$4-billion court claim against Hydro-Québec and Churchill Falls Corporation, saying their culture and way of life have been devastated by construction of the 5,428-megawatt Churchill Falls hydropower project beginning in 1967.

“My god, it is 50 years past due,” said Grand Chief Etienne Rich. “Hydro-Québec has made billions of dollars from that contract. It has not paid us a single penny for the damage to our land, or damage to our life and to our people,” and “every time we try to sit down with them, they always avoid us.”

Rich added that the Innu are still open to discussions with the provincial utility on reparations. But “the impact of Churchill Falls has been felt across generations of Innu. What happened, it was not right. Our Elders deserved better treatment then, and we demand better treatment now.”

A Hydro-Québec spokesperson said the company didn’t see the legal action in the Supreme Court of Newfoundland and Labrador coming. “We were surprised by this request,” Gary Sutherland told CBC. “Hydro-Québec at this point is going to read the legal documents when they arrive, if they have not already arrived.”

At a news conference yesterday, Innu community leaders “said their people have lived with anger, hurt, and loss for decades, since construction began in 1967,” CBC writes. “That construction, which continued into the mid-70s, backed by the power utilities of Quebec and Newfoundland and Labrador, led to subsequent flooding of ancestral lands.”

The series of dikes along the Churchill, the longest river in Labrador, “resulted in the flooding of an area of land larger than Prince Edward Island, which is now known as the Smallwood Reservoir,” CBC adds. “While the generating station is located in Labrador, the lion’s share of its power and those associated profits flow to Hydro-Québec until 2041 under the terms of a 1969 contract that has been disputed numerous times in court.”

The project was not subject to environmental assessment or Indigenous consultation, but “we certainly did not consent to it,” said Deputy Grand Chief Mary Ann Nui. “In fact, we were not even told when the flooding would begin, or how much the water would rise.”

The Innu Nation is receiving some compensation for the project under a 2011 agreement with the government of Newfoundland and Labrador, CBC says. But Nancy Kleer, a lawyer for the Nation, “said the time has come for Hydro-Québec to agree to a compensation deal of its own, in an era marked by reconciliation efforts between governments and Indigenous people in Canada.” The Innu are in the process of completing a land claim agreement with Canada, she added. But “the Innu treaty, like all modern treaties, will not provide compensation for the impacts of historic projects on Innu lands that have infringed their Aboriginal rights.”

I was fortunate to work in Labrador in the early 70s when the flooding for the Churchill Falls dam was about to start. As a young researcher, part of a Labrador Royal Commission delegation, I met with a number of First Nations and Metis people affected by the dam, and discovered that their traditional trapping and hunting rights were about to be obliterated without any public consultation or impact assessments. The bitterness and sense of loss that they felt was palpable, but there was no effort by the provincial government to address these issues, and the Royal Commission mentioned nothing of this in its final report; indeed, indigenous rights were not even a part of the Commission’s mandate!

It’s particularly ironic that the lake created by the dam is named after Joey Smallwood, who not only bulldozed aside any opposition to the project, but signed a contract which allowed Hydro Quebec to buy the power at a tiny fraction of its real value, with no renegotiation for 70+ years! Thus ended any possibility that the revenues from hydro generation would be available to compensate the people of Labrador, and the Innu in particular, for their losses. A truly tragic and regrettable event, which badly needs to be addressed by those who benefitted from the project.