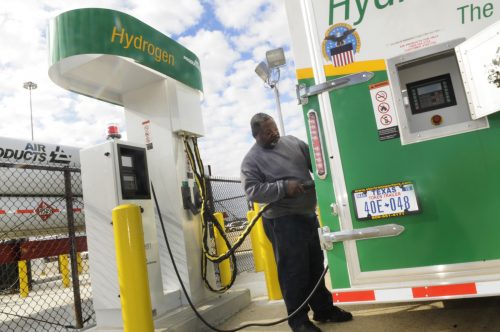 While the definition of “clean” or “green” hydrogen is still distinctly fuzzy, the truly green variety produced from wind- or solar-generated electricity could become the cheapest form within a decade, far sooner than analysts previously expected.

“Chinese manufacturers have reported making systems to create hydrogen with renewable energy for up to 80% less than official Australian estimates from just two years ago,” The Guardian reports. “Energy analysts said it suggested green hydrogen was likely to leapfrog hydrogen made with gas and coal as the most cost-effective form of the energy before the end of the decade, and by the time an industry could be developed at scale.”

Australia has declared “clean hydrogen” a priority low-carbon technology, but hasn’t been entirely clear about what it means by “clean”, the UK-based paper adds. Its low-emissions policy statement, issued last month, “forecast the cheapest way to produce [hydrogen] in the short-term might be to use gas or ‘coal gasification’ with carbon capture and storage (CCS),” adding that renewably-sourced product will become less expensive as demand rises.

But while Australia sees a price of A$2 per kilogram as a “stretch goal” that would make green hydrogen competitive with existing technologies before 2030, Bloomberg NEF (formerly Bloomberg New Energy Finance) sees electrolyzers in China coming in at one-fifth of that cost. Last year, The Guardian writes, the International Renewable Energy Agency reported Chinese manufacturers delivering electrolyzers at a cost that had previously been considered a best case for 2040.

“We think electrolyzers can get much cheaper much sooner than most expect,” said Kobad Bhavnagri, the consultancy’s global head of industrial decarbonization. “The way we see it, there is very little demand for hydrogen from fossil fuels with CCS. It doesn’t fit the scale-up model for an emerging industry.”

The Guardian explains that green hydrogen “is created by using an electrolyser to run an electrical current through water, separating it into hydrogen and oxygen. Gas is used to make hydrogen through a different process involving high-pressure steam and a catalyst such as nickel, known as steam-methane reforming. One of its byproducts is carbon dioxide, which is either released into the atmosphere or—under the [Australian] government’s proposal—captured and pumped underground.”

Advocates and enthusiasts are looking to hydrogen as an “emissions-free alternative to coal and gas in industries that operate at incredibly high temperatures,” the paper notes. “While estimates about the scale of a future industry vary significantly, experts believe it is likely to be more cost-effective if used to help create local green industries, such as emissions-free steel, rather than converted into liquid form, as gas is, before it is exported.”

The Guardian has more detail on Australia’s plans for hydrogen production, and the options for producing it and tracking its carbon footprint.