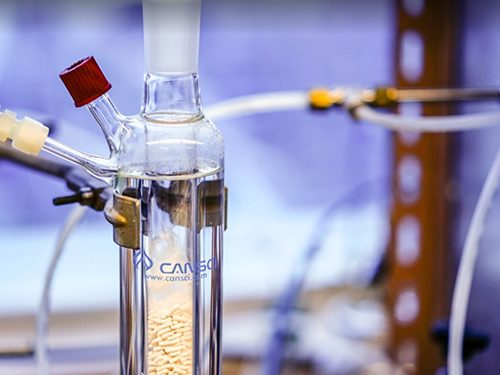 An industrial gas company in China has taken a “noteworthy step” to capture and reuse nitrous oxide, a climate pollutant that is 300 times more potent than carbon dioxide, InsideClimate News reports.

“Linggas, a company based in Beijing that sells industrial gases used in electronics manufacturing, began capturing and purifying waste nitrous oxide gas at a rate of 6,000 tons per year from the Henan Shenma Nylon Chemical Company in central China on September 15,” InsideClimate writes, citing a company spokesperson. That shift will have the equivalent greenhouse gas impact of taking 400,000 cars off the road over the same time span.

The announcement matters because “chemical plants that manufacture adipic acid, a key ingredient in the production of nylon and polyurethane, release vast quantities of nitrous oxide as an unwanted byproduct,” write reporters Phil McKenna and Lili Pike. Eleven chemical plants in China currently account for about half of the world’s supply, and an earlier investigation by the Pulitzer Prize-winning climate newsletter equated the output from the country’s adipic acid plants to the GHG emissions from about 25 million vehicles, “more than all the cars in California, Beijing, and Shanghai combined,” and equivalent to 1.7 billion tons of carbon dioxide emissions through 2035.

“A third nitrous oxide recycling operation at the Chongqing Huafon Chemical Company adipic acid plant in Chongqing, China has the capacity to capture 20,000 tons of waste nitrous oxide per year,” according to environmental impact assessments on the company’s website, InsideClimate says. “If operating at full capacity, the three industrial gas companies could recycle 29,000 tons of nitrous oxide, or the greenhouse gas equivalent of the emissions from 1.9 million automobiles.”

While it’s unclear whether the capture and reuse equipment is running at full capacity, or whether the companies will find a market for the captured gas, InsideClimate says demand for purified product from electronics and photovoltaic solar manufacturers will hit 50,000 tons per year. As well, a low-cost technique to break the nitrous down into nitrogen and oxygen could eliminate 99% of the problem, and while China doesn’t yet regulate emissions, new measures to do so may show up in the country’s new five-year plan when it’s published in March.