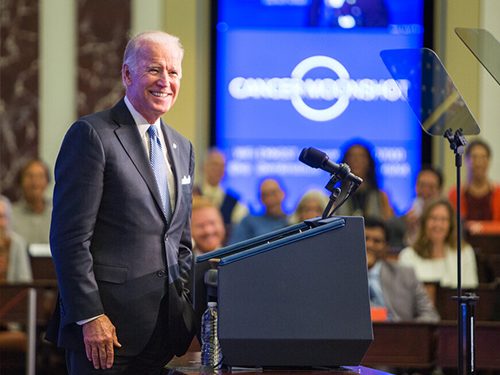 It took a terrifying and dangerous Donald Trump shout-out to a band of white nationalist thugs to draw attention away from one of the most notable moments in the U.S. presidential candidates’ debate Tuesday night: At 10:17 PM Eastern, moderator Chris Wallace kicked off a 10-minute question-and answer segment on climate change.

The last time that happened in a presidential debate was in 2008, Grist reported.

“I’d like to talk about climate change,” Wallace said. “So would I!” replied Democratic nominee Joe Biden, before Wallace turned his attention to Trump. “What do you believe about the science of climate change, sir?” he asked. “Do you believe that human pollution, greenhouse gas emissions, contribute to climate change?”

From there, “the roughly 10 minutes the candidates spent talking about climate change were not only surprisingly extensive, thoughtful, and civil, they represented one of the most substantive conversations President Trump has ever been forced to have about climate change on the fly, and on such a big platform,” Grist writes.

That exchange convinced veteran climate journalist Emily Atkin, publisher of the excellent Heated newsletter [subs here], that “climate change may actually be Trump’s greatest debate weakness. And here’s why: Trump just doesn’t know what to say. A huge reason [Tuesday] night’s debate was such a train wreck was because Trump could not stop interrupting every five seconds. But during the 11-minute climate portion, Trump was weirdly silent. He barely interrupted Biden or Wallace the entire time. This means Trump hasn’t figured out how to deal with tough questions about his climate record (other than saying he likes ‘clean air and water’) or statements of fact about climate change.

Although climate wasn’t on the list of discussion topics published in advance of the debate, Wallace had a solid list of Climate 101 questions for both candidates. “Over your four years, you have pulled the U.S. out of the Paris climate accord. You have rolled back a number of Obama environmental records. What do you believe about the science of climate change, and what will you do over the next four years to confront it?” he asked Trump.

Trump replied that he wants “crystal clean water and air” and claimed the U.S. has done “phenomenally” in reducing its greenhouse gas emissions. “But I haven’t destroyed our businesses. Our businesses aren’t put out of commission,” he told Wallace. “If you look at the Paris Accord, it was a disaster from our standpoint.”

Wallace tried a couple of times to tie Trump down on the basics of climate science—that the atmosphere is warming, and human activity is the primary cause. “Do you believe human greenhouse gas emissions contribute to the global warming of this planet?” he asked. “I think to an extent, yes,” Trump said. “But sir, if you believe in the science of climate change, why have you rolled back the Obama Clean Power Plan, which limited carbon emissions in power plants?” the moderator insisted. “Because it was driving energy prices through the sky,” the former reality TV star inaccurately replied.

Trump repeatedly blamed poor forest management for the epic wildfires sweeping the U.S. west coast, just weeks after California Natural Resources Secretary Wade Crowfoot tried to school him on the connection between the climate crisis and the fires. “The forest floor is loaded up with dead trees,” Trump told Wallace. “You drop a cigarette in there the whole forest burns down.”

Biden used his time to tout his $2-trillion climate action plan, with Trump claiming and Biden accurately denying that the Democratic platform endorses a $100-trillion endorsement in the Green New Deal. But under the Democrats’ plan, “nobody’s gonna build another coal-fired plant in America,” Biden said. “They’re gonna move to renewable energy.”

Biden “sought to portray himself as a champion of renewable energy, while at the same time also attempting to distance himself from the Green New Deal, even though that proposal has informed his sweeping plan to spend $2 trillion on green initiatives, an idea that is likely to gain little traction in Congress,” the New York Times writes.

Several publications pointed to the nearly unique moment of having a series of climate change questions included in a U.S. presidential debate, with the implication that the climate crisis is no longer seen as a niche or second-tier topic.

“Climate change is usually an orphan issue,” Rice University history professor Douglas Brinkley told the Times. “The fact that it got raised at all last night is showing that it’s starting to get some of the national stature it deserves and is no longer just a niche Democratic left concern.”

Like all the rest of the debate, the climate segment “got contaminated by the insult-mania, with answers kind of ricocheting all over the place and the public not getting a clear view of how we are going to attack this crisis,” Brinkley added. “But it’s a good opportunity for moderators to prepare for it to come up in the next two debates, to try to calm the babble and get more coherent answers” from the candidates [or at very least from the one out of the two who’s capable of being calm or coherent—Ed.].

As for the distinction between niche and mainstream issues, an average of 76% of U.S. adults want to hear more about the candidates’ plans to confront the climate crisis, according to a survey conducted over the summer by the Yale University Program on Climate Change Communication that included extensive breakdowns by specific issues and by state.

“Climate change is only one of a number of pressing issues for Americans as they go to the ballot box this year,” The Independent writes. “However, a study by the Pew Research Center in April found that the number of Americans who say global climate change is a major threat to the country jumped from 44% around a decade ago to 60% in 2020.”