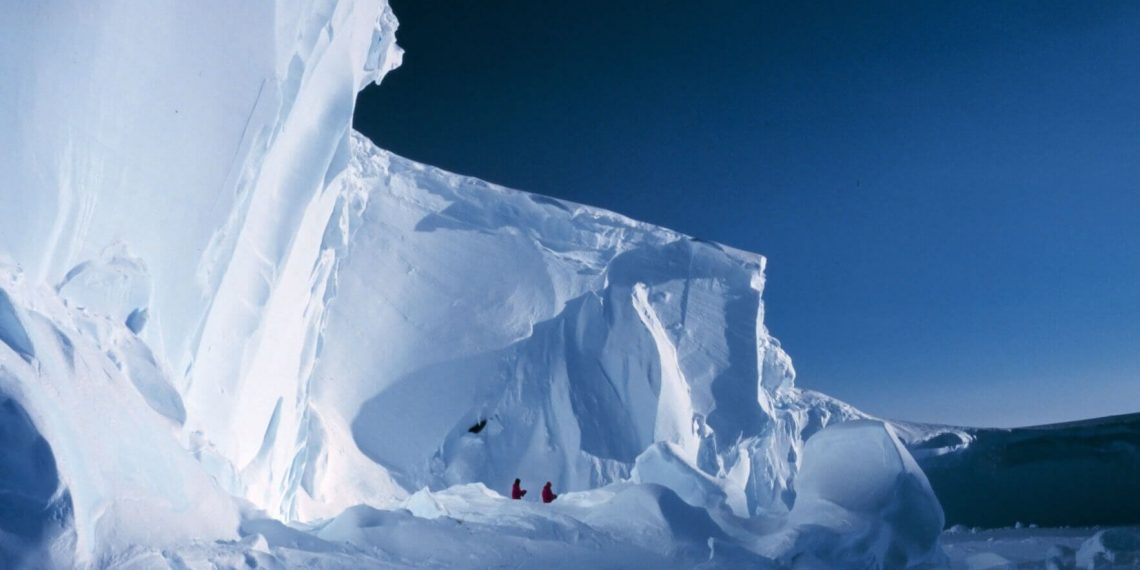 The Ross Ice Shelf at the Bay of Whales in Antarctica – the southernmost navigable point on Earth. Image: By Michael Van Woert

Global heating means the southern ice will melt. Antarctica’s ice loss could then be permanent, drowning many great cities.

LONDON, 2 October, 2020 – The greatest mass of ice on the planet is growing steadily more unstable, and that means Antarctica’s ice loss may before long be inexorable.

New studies show that right now, just one degree of warming must mean an eventual sea level rise of 1.3 metres, simply from the flow of melting ice from the continent of Antarctica.

If the annual average temperature of the planet goes beyond 2°C, then the Antarctic melting rate will double. And when global heating really steps up to 6°C or beyond, melting accelerates to the almost unimaginable level of 10 metres for every single degree rise in planetary average temperatures.

And, the researchers say, there is no way back. Even if the world’s nations stick to a promise made in Paris in 2015, to keep global heating to “well below” 2°C by the end of the century, the losses of the southern polar ice sheet cannot be restored: the process of melting, once triggered by global temperature rise, becomes inexorable.

European and US researchers report in the journal Nature that they worked through ice core records of long-ago change in Antarctica and employed a million hours of computer simulation time to build up a reliable picture of change on the Antarctic continent, in response to ever-higher planetary average temperatures, driven by ever more profligate use of fossil fuels to generate ever-higher atmospheric ratios of greenhouse gases.

Their word for the state they wanted to study is hysteresis: this can be interpreted as the way altered conditions might commit a state to further change.

“If we give up the Paris Agreement, we give up Hamburg, Tokyo and New York”

The planet’s climate has oscillated many times over many millions of years. What this climate shift does to the polar regions can literally change the map of the planet. Antarctica is an enormous continent, the size of the US, Mexico and India together, and the ice it bears would, if it all were to melt, raise global sea levels by 58 metres.

“Antarctica holds more than half of Earth’s fresh water, frozen in a vast ice-sheet which is nearly five kilometres thick. As the surrounding ocean water and atmosphere warm due to human greenhouse gas emissions, the white cap on the South Pole loses mass and eventually becomes unstable,” said Ricarda Winkelmann, of the Potsdam Institute for Climate Impact Research.

“Because of its sheer magnitude, Antarctica’s potential for sea level contribution is enormous. We find that already at two degrees of warming, melting and the accelerated ice flow into the ocean will, eventually, entail 2.5 metres of global sea level rise just from Antarctica alone. At four degrees, it will be 6.5 metres and at six degrees almost 12 metres, if these temperature levels would be sustained long enough.”

That loss of ice would be slow – it would take many thousands of years – but the point the researchers make is that the continent may already be nearing a tipping point, after which the slide towards ever-higher sea levels would be unstoppable.

Since the great ice sheets of Greenland and Antarctica are part of the planetary cooling system – their whiteness reflects solar radiation back into space, so that the ice becomes its own insulation – their loss would inevitably trigger the process of further and faster warming.

Scientists from all nations have been warning for more than a decade that the continent is losing its protective screen of seaborne shelf ice, which in turn would make glacier flow towards the sea ever faster, and that the rate of loss of ice has begun to accelerate.

“In the end, it is our burning of coal and oil that determines ongoing and future greenhouse gas emissions and, therefore, if and when critical temperature thresholds in Antarctica are crossed.

“And even if the ice loss happens on long time scales, the respective carbon dioxide levels can already be reached in the near future,” said Professor Winkelmann.

“We decide now whether we manage to halt the warming. So Antarctica’s fate really lies in our hands – and with it that of our cities and cultural sites across the globe, from Rio de Janeiro’s Copacabana to Sydney’s Opera House. Thus this study really is another exclamation mark behind the importance of the Paris Climate Accord: Keep global warming below two degrees.”

And her Potsdam co-author Anders Levermann reinforced the argument. “Our simulations show that once it’s melted, it does not regrow to its initial state even if temperatures eventually sank again.

“Indeed, temperatures would have to go back to pre-industrial levels to allow its full recovery – a highly unlikely scenario. In other words: what we lose of Antarctica now is lost forever.”

And he warned: “If we give up the Paris Agreement, we give up Hamburg, Tokyo and New York.” – Climate News Network