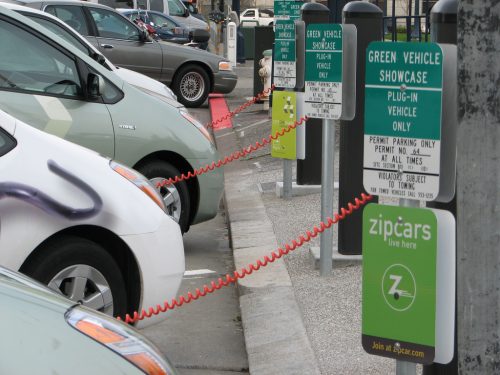 Plug-in hybrid electric vehicles (PHEVs) are a “wolf in sheep’s clothing” with tailpipe emissions 2.5 times higher than the results of automakers’ official tests, according to a new assessment conducted by Transport & Environment and Greenpeace UK.

“Car makers sell PHEVs on a promise that they have far lower emissions than their petrol and diesel equivalents, as well as non-pluggable hybrid vehicles,” The Driven reports. But the study indicates “that actual usage patterns—and manufacturer’s operating parameters—paint a very different picture.”

With smaller batteries that only deliver an all-electric driving range of 50 to 80 kilometres, PHEVs offer only slightly lower emissions than a conventional hybrid like a Toyota Prius, and only moderately better emissions performance than a standard internal combustion vehicle, the two organizations concluded. The Driven says the report places the various vehicles’ carbon dioxide emissions per kilometre at 117 grams for a typical PHEV, 135 grams for a hybrid, 164 grams for a new, diesel-fueled internal combustion car, and 167 grams for gasoline.

“Over the lifetime of the vehicle, a new PHEV in 2020 will emits about 28 tonnes of CO2, slightly less than a conventional hybrid car,” at 32 tonnes, the report states. “In comparison, a conventional petrol or diesel car emits 39 and 41 tonnes, respectively.”

Underlying all of those numbers, “a new battery electric car will emit about 3.8 tonnes from the electricity it uses over its lifetime,” depending on more specific assumptions about how the electricity is produced. So “it is clear PHEV emissions are much more comparable to those of conventional cars than electric cars.”

While the top 10 PHEVs sold in the United Kingdom offer an EV-only mode, The Driven adds, “the reality is that it is the manner in which the vehicle is driven, the ambient temperature, and the use of heating or cooling that makes it very difficult to achieve any 100% pure electric driving.”

PHEVs “may seem a much more environmentally friendly choice, but false claims of lower emissions are a ploy by car manufacturers to go on producing SUVs and petrol and diesel engines,” said Rebecca Newsom, Greenpeace UK’s head of politics.

“It’s great that the government is considering bringing the ban on new petrol and diesel vehicles forward to 2030,” she added. “But ministers mustn’t be duped by plug-in hybrids when making this critical decision. It’s imperative that they are included in the 2030 ban, and that support is provided to enable workers to transition to electric vehicle manufacturing.”