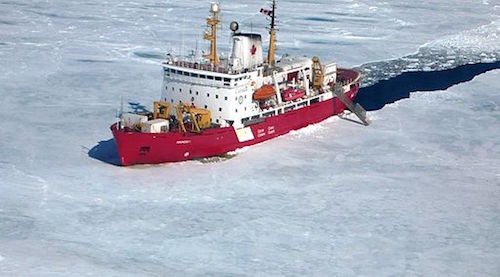 A massive climate research project celebrated as the world’s largest-ever Arctic expedition is under fire for gender disparities in work assignments and creating an unwelcoming atmosphere for women, after managers imposed a dress code to prevent the women onboard the ship from becoming a “distraction” to their male colleagues.

The story was told by E&E News reporter Chelsea Harvey, one of four female journalists onboard the Russian research vessel Akademik Fedorov as part of the Alfred Wegener Institute (AWI)’s MOSAiC science mission.

“Akademik Fedorov launched from the port city of Tromsø, Norway, on September 21, 2019,” Harvey wrote earlier this month, with dozens of scientists, engineers, and technical staff, a handful of journalists and science educators, and 20 graduate students onboard. “The ship’s mission: to assist the MOSAiC expedition’s flagship vessel, the German icebreaker Polarstern, in setting up a network of drifting research stations on the Arctic sea ice.”

The Akademik Federov was to be at sea for six weeks. The Polarstern is due to return this fall.

The expedition is a “logistical feat”, and “a milestone for Arctic science,” Harvey added. “But the events on board Akademik Fedorov demonstrate that polar research still suffers from a lack of diversity and issues with sexism, sexual harassment, and hostile environments for women.” Those “problems are pervasive in field science across the board, experts say. But they may be amplified in polar research, a field with a long legacy of exclusion.”

Harvey began her account with a meeting two weeks into the voyage involving four women journalists and AWI communications manager Katharina Weiss-Tuider. “Drifting on a ship in the middle of the Arctic Ocean, four women listened in quiet disbelief to the rules of a new dress code,” she wrote. “No leggings. No crop tops. No ‘hot pants’. Nothing too tight or too revealing.”

The rules “were partly a matter of dressing respectfully, [Weiss-Tuider] said. An expedition member had recently appeared on the bridge—an area frequented by the captain and other high-ranking crew members—in pajamas. But that seemed like an afterthought to what came next.” On a ship where the majority of the crew were men, some of whom would be at sea for months, “the rules prohibiting tight clothing were a ‘safety issue’,” Harvey wrote. “The implication seemed clear to the reporters. Women should dress modestly or risk being harassed—or worse—by men on the ship.”

The voyage’s chief scientist, AWI researcher Thomas Krumpen, wasn’t present for the meeting with the journalists, but “delivered a similar message to a group of other participants that same day, including most of the other women on board Akademik Fedorov,” she recounted. He also added thermal underwear to the list of banned garments.

“Expedition leaders denied the rules were meant to single out women. But many MOSAiC participants felt they perpetuated an insidious form of sexism: the idea that women’s bodies are a distraction in the workplace and that women are responsible for managing the behaviour of men.”

Harvey said the dress code produced an “undercurrent of resentment” in the weeks that followed, and came to symbolize other inequalities on the project: There had been problems with harassment before the new rules were introduced, though AWI staff denied the two were related. And in the course of the expedition, “participants pointed out inequalities in the division of work assignments between men and women,” with women making up less than one-third of the MOSAiC participants on the ship and “only a handful of the mission’s senior scientists and engineers.”

Harvey’s detailed account digs into the male-dominated history of polar exploration, driven by the “archetype of the white male explorer”. University of Cambridge researcher Morgan Seag, who studies gender and policy in polar research, said women’s presence on expeditions “was historically perceived as distracting and emasculating,” Harvey wrote, with Admiral George Dufek, head of U.S. Antarctic programs in the 1950s, contending that women’s presence would “wreck the illusion of being frontiersmen going into a new land and the illusion of being a hero.”

The news story goes into detail on the way the dress code ruling shaped and reflected a voyage where women were pushed to a back seat.

“It seems like in particular the women were being targeted because of this whole tight yoga pants, hot pants, whatever they were actually called,” said Colorado State University researcher Jessie Creamean, one of the few female scientists onboard.

“I was even more disappointed that the only conversation we ever had on the ship about women’s physical safety or harassment—isolated as we were in the middle of the Arctic Ocean without any law enforcement—was one where women were told we should be dressing differently,” added another participant, who declined to be identified.