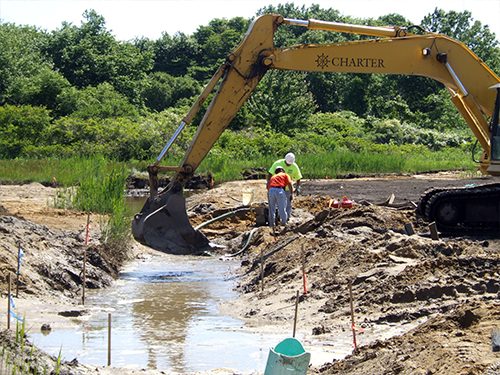 More than two-thirds of the 1,334 Superfund sites that currently blight the U.S. are increasingly at risk of serious climate change impacts—but that hasn’t stopped the White House from doubling down on denial while slashing funds earmarked for remediation.

Reporting on a recent investigation it conducted in partnership with the Texas Observer and NBC News, InsideClimate News focuses on 945 of America’s Superfund sites—heavily contaminated locations, such as old processing plants, landfills, or mines, that have been identified for cleanup under the United States’ Comprehensive Environmental Response, Compensation, and Liability Act (CERCLA). It reveals that those sites are particularly vulnerable to three specific climate risks—floods, rising seas, and hurricanes—with wildfires also posing a growing concern.

Yet the Trump administration has forbidden government officials, including those who work for the Environmental Protection Agency (EPA), from even using the term “climate change.”

The vulnerability of these sites was demonstrated to horrific effect in 2017, when Hurricane Harvey smashed into the San Jacinto River Waste Pits near Houston, tearing off the concrete cap that was keeping a lid on the site’s slurry of carcinogenic toxins. An EPA dive team later found dioxin levels in downstream river sediment to be “2,300 times the agency’s standard for cleanup,” writes InsideClimate.

Several miles upriver, the French Limited Superfund site was also flooded in the storm, but in that case there was no leakage—a fortunate outcome that, according to a Government Accountability Office (GAO) report issued last year, could easily have gone the other way. Still, the site desperately needs remediation: between 1966 and 1971, “70 million gallons of toxic chemicals were deposited at the site, including known carcinogens like benzene and vinyl chloride, and dangerous heavy metals like arsenic,” writes InsideClimate.

The LCP Chemical Superfund site, located on 813 acres of marsh on the Georgia coast, “is extremely vulnerable to inundation by sea water, which hastens the release of toxic mercury and PCBs into the marsh and then into creeks and rivers that crisscross the site.”

Under the Obama administration, some attention was (slowly) being turned to sites like these, notes InsideClimate. “EPA officials across all regions were expected to adopt enforcement plans to reduce greenhouse gas emissions, slow the effects of climate change, and harden infrastructure, including at Superfund sites.” The EPA responded with senior staff in all of its 10 regions moving to finalize plans to address the climate vulnerabilities of the nation’s Superfund sites.

“The message was clear: we need to take aggressive action now to stave off the worst effects of climate change,” said Betsy Southerland, a former long-term EPA official.

The Obama administration was deeply criticized for a lack of major progress in these actions, but even what little was implemented is now being undone. “The Trump administration has largely abandoned plans written by all 10 EPA regional offices that factored climate change risks into Superfund planning and remediation,” writes InsideClimate. Determined to erase all signs of his predecessor, Trump rescinded the climate preparedness order in March 2017, and the “EPA’s current five-year strategic plan makes no reference to climate-related risks in relation to Superfund site management, planning, or clean-ups.”

Not so, said former EPA administrator Judith Enck, who told InsideClimate that “removing climate change from strategic planning makes Superfund sites vulnerable now and into the future”. She added that the situation is now like “going down a steep hill with failing brakes.”

Yet the current U.S. administration is leaning in on its refusal to protect its citizens from the dangers posed by the Superfund sites. “The Trump administration is now proposing a 26% cut in the EPA’s 2021 budget, which would strip US$106 million from the Superfund clean-up program and eliminate all funding for so-called environmental justice communities impacted by Superfund sites—low-income and minority neighbourhoods disproportionately affected by adverse health conditions and environmental problems.”

InsideClimate says these cuts occur even as scientists predict more frequent and intense hurricanes along the east coast and in the Gulf of Mexico—which will also see sea levels rise at double the global rate.