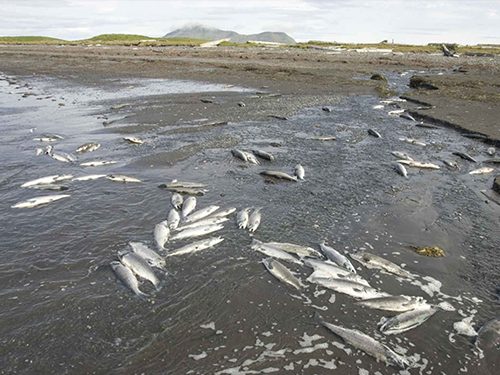 The increasing incidence and severity of marine heat waves is directly linked to the climate crisis, says a groundbreaking report by environmental and climate physicists from Switzerland. Formerly occurring only once every thousand years, such killing surges of oceanic heat may soon come as often as once per decade.

“The study, published in the journal Science, looked at the Blob and six other large events around the world, including one in the Northwest Atlantic in 2012,” reports The New York Times. “Human-caused global warming made these events at least 20 times more likely, the researchers found.”

Lead author Charlotte Laufkötter, a marine scientist at the University of Bern in Switzerland, said some of these events “couldn’t even have occurred without climate change.” Before human-caused warming, she told the Times, “a large marine heat wave would have had about a one-tenth of 1% chance of occurring in any given year—what is called a thousand-year event.” Should global warming continue unabated, such a heat wave could soon have “as much as a 10% chance of occurring.”

Laufkötter and her team also found that “if emissions of greenhouse gases continue at a high level for decades and average global temperatures reach about 5°C above preindustrial levels, some parts of the oceans may be in a continuous state of extreme heat.”

Pippa Moore, a marine ecologist at Newcastle University in England, told the Times it is the rate of warming, rather than the ultimate temperature of the wave, that proves most devastating to marine life. “That rate of heat rising is just too quick for their physiology to cope with,” said Moore, who was not involved with the Swiss study. “It leads to reduced growth rates, heightened risk of disease, and greater mortality.”

And then there are the indirect effects of the heat wave, such starvation following the loss or migration of key food sources, or the generation of toxic algae blooms.

The effects of these marine heat waves can reach into the human world as well, notes the Times. “The blob in the Pacific may have influenced weather patterns on the West Coast, worsening drought in California, for example. The 2012 heat wave in the Atlantic affected the lobster harvest in the Gulf of Maine and raised trade tensions between the United states and Canada.”