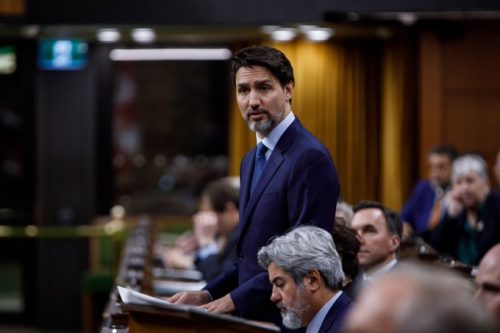 He added: “This is our wake-up call, and we cannot ignore it.”

Separately today, Trudeau is joining French President Emmanuel Macron, German Chancellor Angela Merkel, New Zealand Prime Minister Jacinda Ardern, and even climate-challenged British PM Boris Johnson in a group of 64 world leaders from five continents signing on to a 10-point pledge to halt the Earth’s destruction, The Guardian reports. “All signatories to the Leaders’ Pledge for Nature, launched virtually in New York on Monday, have committed to putting wildlife and the climate at the heart of post-pandemic economic recovery plans, promising to address the climate crisis, deforestation, ecosystem degradation, and pollution.”

The leaders say they will “clamp down on pollution, embrace sustainable economic systems, and eliminate the dumping of plastic waste in oceans by the middle of the century as part of ‘meaningful action’ to halt the destruction of nature on Earth,” the UK-based paper writes. “The commitments include a renewed effort to reduce deforestation, halt unsustainable fishing practices, eliminate environmentally harmful subsidies, and begin the transition to sustainable food production systems and a circular economy over the next decade. The leaders describe the pledge as a ‘turning point’ by which future generations will judge their willingness to act on environmental destruction.”

The promise to eliminate “harmful subsidies” echoes a promise by G20 countries that dates back more than a decade, and that Canada and other nations have yet to fulfill. The announcement comes ahead of a major UN biodiversity summit to be held virtually this Wednesday where speaking slots “are oversubscribed, with more than 116 heads of states and governments asking to address the event,” The Guardian says.

In his General Assembly speech, Trudeau compared the “monumental challenge” confronting the current generation of international leaders to what their predecessors faced during the Great Depression of the 1930s and the Second World War, CBC reports. “Time and time again, history has shown us that the price to pay for turning away, for failing to act, is much too high,” he said. “That is what the crisis of COVID-19 has shown, beyond a shadow of a doubt. That things have to change,” and “not just on the world stage but at home, too.”

The PM added that COVID-19 is not the biggest challenge humanity faces.

“Right now, our world is facing a climate reckoning,” he said. “We are at this point because of our collective inability, over the past decades, to make the tough decisions and sacrifices needed to fight climate change and save future generations.”

In what was interpreted as a veiled reference to the UN Security Council, he added that “too often concerted action is blocked—the needs of our citizens are denied—as a result of gridlock at decision-making bodies.”

On Thursday, UN Secretary General António Guterres called out governments around the world for throwing up roadblocks to the transition to carbon-neutral economies by 2050, Reuters reports. “Governments are an obstacle in many areas for (the) private sector and other entities to be able to establish their own transitions,” he told a virtual climate roundtable.

Beyond introducing their own net-zero emissions plans, Guterres challenged national governments to “create the conditions to allow companies, cities, civil society groups, and other organizations to do the same,” Reuters writes. “He called on governments to reform regulations and policies that currently go against action on climate change, such as financing coal power plants and providing subsidies for the extraction and use of fossil fuels.”

Guterres also shed some light on the political factors blocking progress. He recounted how “one prime minister had told him it was hard to end subsidies for dirty fuels because it would hurt people’s wallets. Another said he could not tax carbon pollution, as it would lose him voters,” Reuters states.

“Guterres said he advised the leaders to give financial support not to fossil fuels but to poorer people in need, and to reduce payroll taxes while boosting them on carbon emitters, a measure he said could help win elections.”