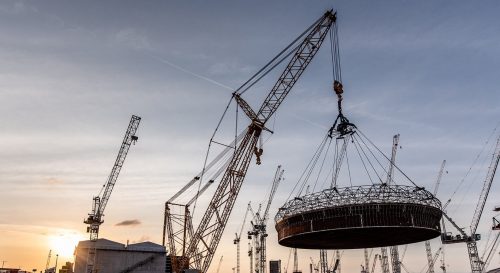 The UK nuclear industry hopes the British government will go on subsidising it, despite the existence of cheaper fuels.

LONDON, 23 September, 2020 – The decision by the Japanese company Hitachi to abandon its plan to build two large nuclear plants in the United Kingdom leaves the British government’s energy plans in tatters, and the UK nuclear industry reeling.

The UK’s official plan is still to build ten nuclear stations in Britain, but only three schemes remain. Most have now been cancelled by the companies that planned to build them, principally because they cannot raise the capital to do so. This leaves only the debt-laden French giant EdF and the Chinese state-owned industry still in the field.

At the same time, Britain’s existing nuclear plants are in trouble. They are not ageing gracefully, cracks in their graphite cores and rust in their pipework causing ever-lengthening shutdowns and retirement dates to be brought forward.

The plants at Hunterston B in Scotland, Hinkley Point B in Somerset in the West of England, and Dungeness B in Kent on the south-east coast, are all struggling to survive.

Meanwhile the main competitors to nuclear – solar, and both onshore and offshore wind farms – continue to be built apace and produce electricity at half the price of new nuclear power.

These setbacks for the nuclear industry are mirrored in the US, where existing nuclear plant can no longer compete with renewables and is being retired early by utilities, which need to make a profit to survive in a competitive market.

EdF, the only company currently constructing nuclear power stations in western Europe, is currently building two giant new reactors at Hinkley Point C. It hopes to build two more at Sizewell C in Suffolk in eastern England, but these are delayed because the lucrative deal offered by the UK government to induce EdF to build those in Somerset is no longer on offer.

The company awaits a decision from the government on a new way to subsidise Sizewell C, which could mean buying a stake in the power station, or a nuclear tax on consumers to pay for the capital cost, neither of which is likely to be popular with the public.

The problem for the French company is that it currently relies on the Chinese to pay one-third of the cost of both the Hinkley Point and Sizewell stations, and the UK’s relationship with China has soured over Hong Kong democracy and security concerns.

The Chinese also plan to build their own reactor on the seashore at Bradwell in Essex, east of London, as a global showcase for their technology, but because of fears of allowing the Chinese to control part of the UK’s power supply that scheme now looks increasingly unlikely, although officially Beijing is still pressing ahead.

A long-awaited energy White Paper (a government policy document setting out proposals for future legislation) describing how to get the country down to zero carbon emissions by 2050, a target enshrined in law, is due to be published before the end of 2020.

“In the UK, onshore and offshore wind is less than half the cost of nuclear. If the UK government keeps planning for nuclear power plants, it’s not because there was no choice”

The date has already been put back several times. The paper will include the government’s new position on nuclear power, which has not been revised since 2005.

At stake is the future of the nuclear industry, not just in Britain but further afield as well: the UK is the only country in Western Europe that still supports new large-scale nuclear plants.

The nuclear industry is not giving up hope for its technology, despite the bleak prospects. It is pushing the latest idea of small modular reactors (SMRs) that can be factory-built.

In the UK the engineering company Rolls-Royce is pushing its own version of this. Detractors say this is another unproven and potentially expensive diversion from the need to tackle climate change with cheaper renewable technologies.

One glimmer of hope for the industry is the British prime minister Boris Johnson’s chief adviser, Dominic Cummings, who is said to favour “blue sky thinking” and to enthuse about the possibilities offered by “green” hydrogen, produced by electrolysis from either renewables or nuclear stations.

This has led the nuclear industry to consider using reactors to produce hydrogen and so make it part of the green revolution, although it would be a very expensive way of doing it.

While in the past the nuclear industry has struggled with public alarm about waste issues and radioactivity, it now has one over-riding problem: cheaper competition and its inability to finance itself.

As Mycle Schneider, lead author of the World Nuclear Industry Status Report, puts it in an interview with pv magazine: “It has become obvious that renewables, even unsubsidised, come in at a fraction of the cost of new nuclear power.

“In the UK, onshore and offshore wind is less than half the cost of nuclear. If the UK government keeps planning for nuclear power plants, it’s not because there was no choice, and it has nothing to do with market economy-driven energy policy.”

In western Europe, Japan and the US, where market forces dominate and nuclear power has fallen out of favour, the coming UK White Paper is a potential beacon of hope for what looks like a sunset industry.

The nuclear industry hopes that in Britain it still has a champion that will throw it a lifeline by providing new subsidies. If it does, it will be a political decision that triumphs over financial common sense. – Climate News Network