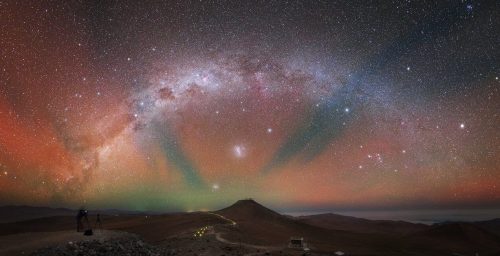 LONDON, 22 September, 2020 – Science has extended research into the global heating crisis, thanks to new ideas on climate. And, conversely, climate change has extended science in unexpected ways.

Seismologists believe they may have a new way to take the temperature of the world’s oceans. And astronomers focused on distant galaxies have unwittingly amassed a 30-year record of climate change in the Earth’s own atmosphere.

Both discoveries, in the same week, start with the simple physics of sight and sound. US and Chinese researchers report in the journal Science that records from submarine earthquakes could now deliver an unexpected way of measuring the warmth of the water.

Submarine earthquakes create a pattern of sound that can be transmitted immense distances through the ocean without much weakening. And, since the speed of sound in water increases as the temperature of the water rises, the length of time the sound takes to reach detector equipment is itself an indicator of ocean temperature.

“It is of prime importance that astronomy uses its unique perspective to claim this simple fact: there is no planet B”

Just as the differences between the speed of lightning and the speed of thunder can establish the distance of an electrical storm, so if researchers know the time and distance of the sea floor event, they have a way of taking the temperature of the water. The constant rumbling of a living planet could offer a new set of easily assembled readings.

“The key is that we use repeating earthquakes – earthquakes that happen again and again in the same place,” said Wenbo Wu, of the California Institute of Technology, who led the Science study.

“We’re looking at earthquakes that occur off Sumatra in Indonesia, and we measure when they arrive in the central Indian Ocean. It takes about half an hour for them to travel that distance, with water temperature causing about one tenth of a second difference. It’s a very small fractional change, but we can measure it.”

The finding matters because – although humans have been recording local ground and air temperatures for at least 300 years, and worldwide for more than a century – it is much harder to be sure about ocean temperatures: the seas cover 70% of the planet, to an average depth of more than 3 kms, and the temperatures vary with both depth and latitude.

Oceanographic research is costly, technically challenging, and uneven. Researchers know that the oceans are responding to climate change driven by global heating as a consequence of greenhouse gas emissions: they do not, however, yet have an assured measure of how much heat the oceans have absorbed, and will go on absorbing.

“The ocean plays a role in the rate that the climate is changing,” said Jörn Callies of Caltech, a co-author. “The ocean is the main reservoir of energy in the climate system, and the deep ocean in particular is important to monitor. One advantage of our method is that the sound waves sample depths below 2,000 metres where there are very few conventional measurements.”

Paradoxically, astronomers need to know a great deal about the first few thousand metres of planet Earth as they peer into the furthest reaches of the universe: what they see and how well they see it is affected by atmospheric temperature, turbulence and moisture.

As ground-based telescopes become bigger and more sensitive – the Extremely Large Telescope now under construction at Paranal in northern Chile will collect light with a mirror 39 metres across – so do the challenges of eliminating the atmospheric turbulence that puts the twinkle in the stars of the night sky: cold air and warm air refract light differently, to create a blur. The bigger the telescope, the greater will be the problem of blur.

For three decades, scientists in the highest and driest part of Chile have been recording subtle and not so subtle atmospheric change. And according to the journal Nature Astronomy, climate change is already beginning to affect astronomical research, and will go on creating problems.

“The data showed a 1.5°C increase in near-ground temperature over the last four decades at the Paranal Observatory,” said Susanne Crewell of the University of Cologne. “This is slightly higher than the worldwide average of 1°C since the pre-industrial age.”

Average wind speeds – wind also affects the precision of observations – have increased by 3 or 4 metres per second in the same period. Humidity, too, is expected to change as the world moves to what could be a 4°C average rise in temperature by the century’s end.

The message is that conditions on Earth can disturb the observations and mask the understanding of events billions of light years away and billions of years ago. Astronomers, too, need to sound the alarm about climate change, she and her colleagues write.

“To do so, a massive cultural shift is needed,” they conclude, “and it is of prime importance that astronomy uses its unique perspective to claim this simple fact: there is no planet B.” – Climate News Network