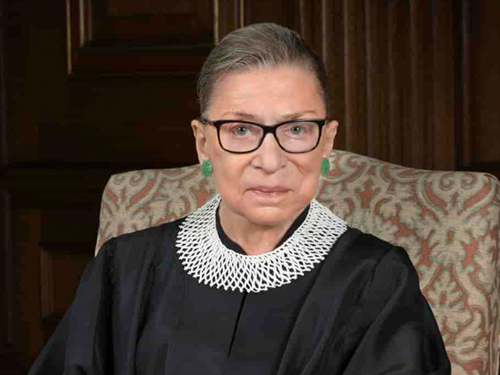 /Supreme Court of the United States

Following his appointment of conservative justices Neil Gorsuch in 2017 and Brett Kavanaugh in 2018, Trump’s nominee to replace Justice Ginsburg, if confirmed by the Republican-controlled Senate, is expected to further cement a right wing majority on the court for decades. That means a future U.S. administration intent on climate action, even with full support from Congress, could find legal efforts to address climate change stymied by a Supreme Court effectively serving as a second legislative branch with entrenched conservative veto power.

Although Justice Ginsburg was better known for her work as a pioneering civil rights lawyer on the issue of gender discrimination, her “notorious” dissenting opinions, and her status as a cultural icon of modern feminism, she was also viewed as a reliable liberal member of the court with respect to cases involving the environment and climate change. In 2007, she was part of the 5-4 majority in the landmark climate case Massachusetts vs. Environmental Protection Agency, in which the court ruled that the EPA is responsible for regulating greenhouse gas emissions under the Clean Air Act. She was also in the dissenting 4-5 minority when the court ruled to halt President Barack Obama’s extensive Clean Power Plan from going into effect in 2016. The CPP would have required states to significantly limit emissions from coal-fired power plants.

Justice Ginsburg’s death has reduced the liberal-leaning (and pro-climate) justices on the nine-member court to a minority of three. So if a third Trump nominee is approved by the Senate (and this remains an open question), a conservative majority of six justices will be capable of radically stripping back the administrative state’s regulatory power over matters such as greenhouse gas emissions, health care, and labour law. This could result in any near-future Green New Deal-type legislation being dismantled by means of legal challenges decided by the Supreme Court. Such a conflict would echo President Franklin D. Roosevelt’s original New Deal legal struggles before the president threatened to “pack the court” by appointing more than nine justices to the bench—a prospect that led the court’s justices to suddenly view Roosevelt’s expansion of federal powers more favourably.

Now, the prospect of the next Democratic president packing the court to rebalance its political tilt is being considered more seriously than at any time since Roosevelt’s presidency. After Republicans blocked Obama nominee Merrick Garland in 2016, nearly eight months before that year’s election, Senate Minority Leader Chuck Schumer (D-NY) has vowed that if the Republicans push through a successor to Justice Ginsberg before the November election, “nothing is off the table”. However, Democratic presidential nominee Joe Biden has said he would not engage in such court packing, lest it wholly destroy the court’s credibility.

Even though the Supreme Court’s liberal and conservative justices often vote in line with their perceived political leanings in high-profile cases, justices can still display a surprising degree of judicial independence from time to time. Bush-appointee Chief Justice Roberts famously voted with the majority to uphold Obama’s Affordable Care Act in 2012’s National Federation of Independent Business v. Sebelius, and Justice Roberts and Trump-appointee Justice Gorsuch both voted with the majority to recognize gay and transgender worker protections under the Civil Rights Act this year in Bostock v. Clayton County.

If Trump does replace Justice Ginsburg with another conservative justice, it is not impossible that a staunchly conservative Supreme Court will vote to uphold U.S. climate legislation that comes before it. It is, however, considerably less likely.

Marc Z. Goldgrub, J.D., LL.M. is an Energy Mix subscriber and lawyer at Green Economy Law Professional Corporation, a boutique Toronto-based corporate and commercial law firm for the new green economy. He is licenced to practice law in Ontario and New York State.