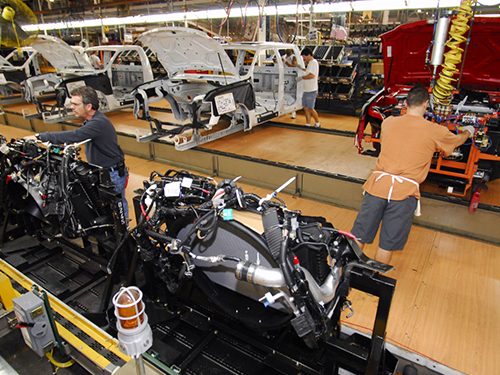 Ford Motor Company of Canada and Unifor have signed a tentative collective agreement that commits the company to a C$1.8-billion investment to build five electric vehicle models in Oakville, Ontario.

“This is a major commitment from Ford,” said Unifor President Jerry Dias. “This is going to be a key facility, not for the short-term, but for the long-term…this is a decade-long commitment.”

The plant’s 6,300 union workers “had voted to support a strike if a deal could not be reached, with the future of the Oakville plant potentially on the line amid the end of the Ford Edge production,” CP writes. But now, subject to a ratification vote this weekend, the plant will be “retooled for electric vehicle production starting in 2024,” with assembly of the fifth and final model beginning in 2028.

“We have been talking for decades about having a national auto strategy in this country, and for some reason, we can never seem to get everybody in the room at the same time,” Dias said. But “over the last several months, those walls have really been torn down,” and “I’m really pleased to see that the federal government and provincial government are working hand in hand.”

Just two days earlier, the Toronto Star reported the federal government had agreed to up to $500 million in incentives, including a contribution from Ontario, to lure a Ford EV production line to Oakville. “After months of discussion and pressure from environmentalists and labour, Ottawa has told the company it is willing to do what it takes to bring electric vehicle production to Ontario,” the Star wrote over the weekend. “The exact amount from the Ontario government is still being negotiated, a federal source, said, and all of it is wrapped up in the broader labour talks” between Ford and Unifor.

“The money would be a major lifeline for the plant,” the Star adds. “Retooling is expected to start as soon as next year, giving the Oakville Assembly Complex and its thousands of workers a new lease on life.” Dias made the same point in the CP story that followed, pointing to the next generation of autoworkers as the biggest beneficiaries from the deal.

“It’s an opportunity for our young people that work in Oakville, and frankly in Windsor, as well, and throughout the other operations, to sit back and say, ‘With this announcement I can buy a house, I can plan my future, I can plan a family,’” he said. “It really is about young people being able to plan 20 years ahead, which will make a significant difference in their life.”

The news from Oakville landed just as the New York Times was reporting that the age of electric vehicles is dawning ahead of schedule.

“An electric Volkswagen ID.3 for the same price as a Golf. A Tesla Model 3 that costs as much as a BMW 3 Series. A Renault Zoe electric subcompact whose monthly lease payment might equal a nice dinner for two in Paris,” wrote automotive reporter Jack Ewing. “As car sales collapsed in Europe because of the pandemic, one category grew rapidly: electric vehicles. One reason is that purchase prices in Europe are coming tantalizingly close to the prices for cars with gasoline or diesel engines.”

So far, that moment of near-parity “is possible only with government subsidies that, depending on the country, can cut more than $10,000 from the final price,” Ewing noted. But “as electric cars become more mainstream, the automobile industry is rapidly approaching the tipping point when, even without subsidies, it will be as cheap, and maybe cheaper, to own a plug-in vehicle than one that burns fossil fuels. The carmaker that reaches price parity first may be positioned to dominate the segment.”

Not long ago, Ewing recalls, EV-watchers were looking to 2025 as the likely turnover year for price parity (or 2022, in a Bloomberg New Energy Finance projection that saw EVs triggering the next oil price crash). “But technology is advancing faster than expected, and could be poised for a quantum leap,” with mercurial Tesla Motors founder Elon Musk hinting at a breakthrough that would extend vehicle range without adding weight.

Basic Income, Just Transition Depend on Each Other, Regehr Says