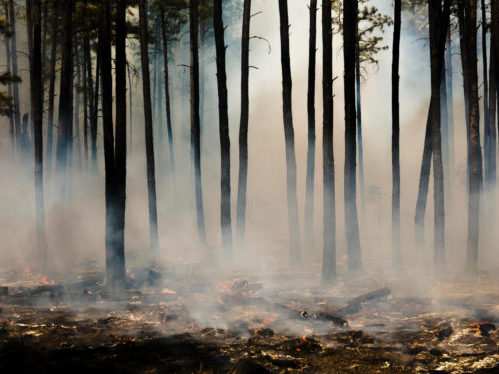 Energy economists may soon need to add a further entry to the chronicle of loss generated by this summer’s wildfire infernos: millions of carbon offset credits.

An immediate case in point, reports Grist, are the massive stretches of forest dedicated to CO2 sequestration that may have been entirely destroyed by the ferocious, 190,000-acre Lionshead Fire in Central Oregon. Owned by the Confederated Tribes of Warm Springs, the tract of land has been generating 2.6 million carbon offset credits annually, based on the carbon stored in the living trees. With each credit equalling one tonne of CO2 kept out of the atmosphere, the Oregon forest stored the equivalent of the emissions produced by “driving 560,000 cars around for one year,” writes Grist.

Fundamental to the complicated calculus of fighting climate change within an economy that still depends upon fossil fuels, carbon offset schemes are intended to give big emitters like power plants the right to exceed emissions limits, provided they counterbalance this pollution by underwriting carbon sequestration elsewhere via mechanisms like tree planting or forest ecosystem support.

In the vanguard of those working with the complexities of carbon economics, California has for some time recognized that the runaway wildfires that come with the climate emergency make the calculations even more difficult—and risky. “If a forest burns down, you didn’t keep carbon out of the atmosphere,” said Stanford University energy economist Danny Cullenward. “So if you let a refinery pollute more because they bought an offset premised on those trees, you have a problem.”

Anticipating this circumstance, the California Air Resources Board (CARB), which oversees the Warm Springs sequestration project, had built in a buffering system whereby “landowners that manage forests under California’s program only get paid for between 80 and 90% of the carbon they store,” explains Grist. The remaining 10 to 20% remains as a “buffer pool” of offsets that can be tapped if a sequestration forest is destroyed by fire.

So after a 2015 fire that wiped out a large sequestration project in Northern California, “CARB pulled 850,000 credits out of the buffer pool to compensate for all that lost carbon storage,” notes Grist.

Five years on, researchers like the University of Utah’s William Anderegg are worried that the roughly 25 million credits in CARB’s current buffer pool won’t be big enough to cover the risk that wildfires pose.

“This doesn’t mean we should give up on offsets, but we need to be clear-eyed about this,” Anderegg said. The risks need to “priced correctly,” he told Grist, to avoid “investing in a bunch of climate policy that may turn out to be worthless.”

As for the Warm Springs project, the full reckoning will become clearer once the Lionshead fire is put out. “The damage could be devastating,” writes Grist. In the worst case, “if all of the 2.6 million tonnes of stored carbon is unleashed into the atmosphere, that means that as much as 10% of the entire buffer pool would be wiped out by just one fire.”