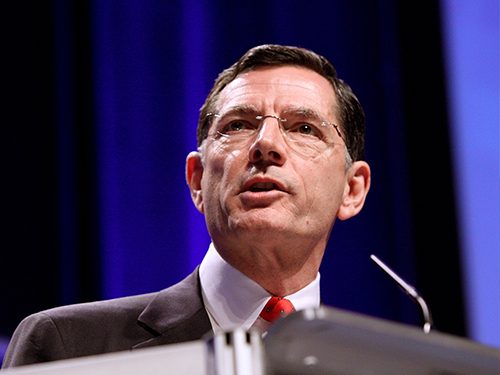 In a brief moment of bipartisan agreement, and what the Washington Post calls a “rare show of defiance of the Trump administration,” the U.S. Senate sealed a deal earlier this month to reduce climate-busting hydrofluorocarbon emissions 85% by 2035.

“Despite the Trump administration’s refusal to join a global agreement to reduce hydrofluorocarbons, which are among the world’s most potent drivers of climate change, a push by U.S. firms and environmentalists appears to have swayed lawmakers,” the Post reports. “The proposed phase-down will be offered as an amendment to a bipartisan energy bill,” though it wasn’t clear whether the measure would pass both houses of Congress and be signed into law by Trump before he leaves office in January. [Yes, we’re assuming it. Just 43 days to go, plus however long it takes to count mail-in ballots.—Ed.]

“This agreement protects both American consumers and American businesses,” said Senate Environment and Public Works Committee Chair John Barrasso (R-WY). “We can have clean air without damaging our economy.” The Post says the 85% phaseout, which Barrasso proposed alongside Senators Tom Carper (D-DE) and John Neely Kennedy (R-LA), “would put the United States on a path to meet the targets outlined under the Kigali Amendment, which modifies the 1987 Montreal Protocol, an international treaty to preserve the ozone layer.”

The win was brought about by an “unusual coalition of business and environmental groups—including the National Association of Manufacturers, the U.S. Chamber of Commerce, FreedomWorks, and the Natural Resources Defense Council,” all of which “have been pushing Trump administration officials for months” to support the Kigali Amendment, the Post adds. The White House declined comment on a measure that was opposed by nearly two dozen U.S. conservative groups led by the Competitive Enterprise Institute and Heritage Action.

For years, refrigerant management placed first on the Drawdown list of 100 measures to reduce greenhouse gas concentrations in the atmosphere, with potential to save the equivalent of 89.7 billion tons of carbon dioxide by 2050. When the Kigali Amendment was adopted in 2016, President Barack Obama said the measure added up to an 0.5°C reduction in average temperature, while advocates said more energy-efficient cooling could boost that reduction to 1.0°C and wipe out eight years’ worth of global emissions by 2060.