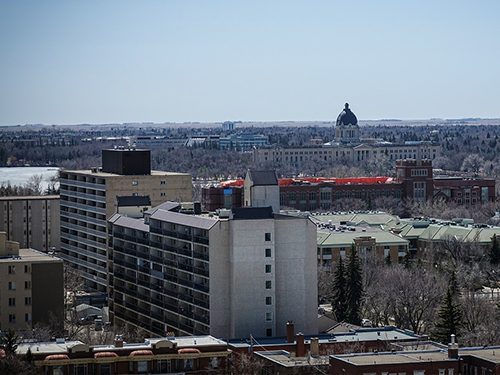 When you think of Regina, you might imagine a city that depends heavily on cars. But when University of Regina professor Emily Eaton gathered a focus group representing community-based organizations throughout the city to discuss how a transition to net-zero carbon emissions might affect communities that have experienced marginalization, she heard another story.

“With the people we serve it’s very different,” one of the participants explained. “They don’t drive. And they certainly navigate the system using public transport as much as they can, although I will tell you that most of the folks we serve can’t afford public transit, and so they walk, and they ride bicycles.”

But the participants went on to agree that the people they support—including 2SLGBTQ+ people, women living in shelters, newcomers, people with disabilities, Indigenous people, and other marginalized and racialized people—often find walking and cycling unsafe and inaccessible. Bike lanes and sidewalks are often poorly maintained or nonexistent, and as one participant said, “A lot of the time people are scared to walk, especially once the sun sets…What if you get followed by someone?”

This was just one of many issues that surfaced at the gathering, demonstrating the inequities that exist in Saskatchewan’s capital city. But such disparities aren’t unique to Regina; they exist in communities throughout Canada and around the world. And they are deeply linked to climate change.

“While marginalized communities are disproportionately affected by climate change relative to other communities, they are often the least likely to benefit from investments in sustainability,” Eaton and co-author Simon Enoch state in their new report, “Putting Equity into Action.”

“Low-income populations and communities of colour are more likely to live in areas with less green space and fewer public transportation options, farther from essential goods and services. They are more vulnerable to heat-related and respiratory illnesses, while living in inefficient housing and closer to environmental hazards.”

This, Eaton says, is why cities need to adopt an equity lens when creating their climate action plans. This takes existing disparities into account and makes sure climate policies work to reduce, not exacerbate, them. An equity lens should inform a climate plan from the outset. It should not, as Eaton says, “be seen as some luxury add-on.”

Failing to address equity can leave vulnerable communities even worse off—a fact that some governments have learned the hard way. The City of Portland, Oregon, for example, is often lauded for its climate leadership. But according to Alisa Kane, climate action manager for the city’s Bureau of Planning and Sustainability, Portland failed its vulnerable communities by not centring them in its climate work from the outset.

In a 2019 article in Fast Company, Kane describes how Portland’s attempts to increase bus ridership were failing despite aggressive targets. What city staff hadn’t considered was that not all Portlanders view the transit system as safe.

“There are real dangers to riding transit,” Kane says in her article. “Misogyny, homophobia, Islamophobia, and other forms of oppression don’t disappear once the door of the bus opens. From verbal harassment to physical attacks, Portland’s transit system is not safe for everyone.”

Kane explains that instead of asking, “How do we get more people on the bus?” city staff had to ask, “Who can’t ride the bus safely, and why?”

Asking the right questions is crucial. But bringing an equity lens to climate planning also requires city staff and council to make sure people with what Eaton calls “the lived experience of marginalization” have a place at the planning table. She stresses that it’s crucial to have these people involved from the very beginning of the process.

Regina is at a key moment in its climate action journey. At the end of September, city administration must present council with a framework for implementing the 100% Renewable Regina motion that council adopted unanimously in 2018. This energy and sustainability framework has been two years in the making, and according to Eaton, Regina residents expect bold ambition.

“It was already referred back to administration because their first report did not adequately lay out a plan for achieving 100% renewability by 2050,” she says. “We are also approaching a civic election in November, and a number of new voices have made a sustainable city central to their candidacy.”

Informed by the focus group discussions, Eaton’s report recommends the city convene two committees to help guide the energy and sustainability framework: an equity committee on sustainability that includes people from marginalized communities and the organizations that serve them, and a just transition committee composed of workers and their representatives from unionized and non-unionized sectors.

She points out that, unlike cities that have already implemented climate action plans, Regina has a unique opportunity “to incorporate [an equity lens] from the beginning and to be led by the people who are going to be impacted by climate change and potentially by climate change policies.”

She’s hopeful the city will heed the report’s recommendations and strike these committees as soon as possible. She’s hopeful, too, that this could be a moment for big change.

“I think that now is the time, and people are really excited about it. With the Black and Indigenous Lives Matter [movements], we’re seeing all of a sudden that we can shift massive amounts of resources from municipal budgets away from institutions of policing and violence toward institutions of health and well-being. Those can easily be integrated with climate justice demands as well,” she says. “The old maxim that there’s no alternative is being shattered.”